Tuesday night’s celebrity red carpet event drew hundreds of supporters to downtown Nashville during CMA Awards Week for a night of food, cocktails and world-class entertainment all to support an incredible local charity. All proceeds from the event will benefit Gabe’s Chemo Duck Program, an organization based in Spring Hill, Tennessee, that provides therapeutic play tools to children living with cancer. 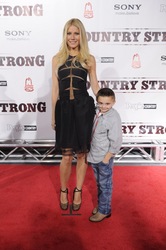 Tuesday night’s CHEMO DUCK GOES COUNTRY – MUSIC CITY FIGHTS CHILDHOOD CANCER red carpet event exceeded all expectations, with hundreds of supporters packing into the historic Berger Building in downtown Nashville during CMA Awards Week for a night of food, cocktails and world-class entertainment all to support an incredible local charity. All proceeds from the event will benefit Gabe’s Chemo Duck Program, an organization based in Spring Hill, Tennessee, that provides therapeutic play tools to children living with cancer.

The charity’s founder, Lu Sipos, didn’t have to look far to find the inspiration for Gabe’s Chemo Duck Program. She found it in her son, Gabe, who was diagnosed with cancer as a toddler.

“My son was so young when we received his diagnosis and it was very hard for me to explain what was happening to him,” explains Lu. “Gabe obviously didn’t know the medical terms and he was very afraid of the medical equipment. When I added hospital pajamas to a stuffed duck and sewed in a chemotherapy line, we naturally began to role-play with this cuddly pal, and Gabe quickly began to understand the procedures and his fear subsided.”

Now 8 years-old and cancer free, Gabe is enjoying his new found celebrity status, thanks to a breakout role opposite Gwyneth Paltrow in the upcoming feature film “Country Strong.” Gabe plays the role of Travis, a Make-A-Wish child who Gwyneth’s character visits during a concert tour. At the Nashville premiere on Monday night, Gabe and Gwyneth walked the red carpet together, and the photos are popping up from coast to coast.

“It’s exciting, but we’re taking it all in stride,” says Lu. “More than anything, we just want to get more Chemo Ducks into the hands of children who are battling this horrible disease.”

ABOUT GABE'S CHEMO DUCK PROGRAM
Gabe’s Chemo Duck Program is a program of the Nashville-based nonprofit organization, Gabe’s My Heart. Established in 2004 to provide education and comfort to children living with cancer through medical play using therapeutic tools, Gabe’s Chemo Duck Program has provided more than 5,000 ducks to children around the world. The goal of the program is to enable hospital staff and parents to prepare children for chemotherapy treatment and eliminate the fear of the unknown. Chemo Duck is a stuffed yellow duck dressed in blue hospital scrubs with a bandana around its head, a chemotherapy port on its chest and an immobilizer on his arm. In a gentle, age-appropriate manner, children learn what to expect during cancer treatment and have a friend to share the experience. In turn, children can use Chemo Duck to help friends, siblings and classmates to understand and empathize with their experience. To learn more, visit http://www.ChemoDuck.org.