$1,400 Gold Coin Put In Salvation Army Kettle By Coin Dealer Michael Fuljenz, Urges Others To Do The Same

To raise awareness of the annual Salvation Army Christmas kettle drive in Texas and across the country, coin dealer Michael Fuljenz of Universal Coin & Bullion Co. donated and placed into a collection kettle a gold coin valued at aproximately $1,400, and he urged other coin dealers and the public to donate whatever they can this holiday season. 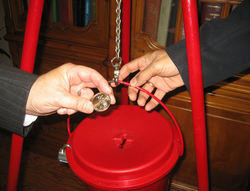 A close up of Michael Fuljenz, President of Universal Coin & Bullion in Beaumont, Texas, placing an American Eagle gold bullion coin valued at about $1,400 into a Salvation Army holiday collection kettle while Major Floiran Estrada of the Beaumont Salvation Army Corps holds the kettle handle.

"There are about 5,000 coin dealers in the United States, and I encourage them, challenge them this Christmas, as well as the public to donate what they can to help people in need," said Fuljenz.

He urged others across the country this holiday season to do the same or, in the Biblical parable of the poor widow's mites, to donate whatever they can afford as the Salvation Army's annual Christmas kettle drive officially gets underway, November 19, 2010.

"There are about 5,000 coin dealers in the United States, and I encourage them, challenge them this Christmas, as well as the public to donate what they can to help people in need," said Fuljenz.

"If you can't afford a one-ounce or even smaller gold coin, remember the New Testament story of the poor widow, and give what you can. The Biblical parable tells us she donated only what she could afford, two tiny bronze coins, mites, but Jesus said, '...she has put in more than all the wealthy donors."

Major Floiran Estrada, Commanding Officer of the Beaumont, Texas Salvation Army Corps, said requests to the Salvation Army for emergency services are on the rise; however, donations the past year are down about 20 percent nationwide, and 24 percent in the Beaumont area.

"It is only when people like Mike Fuljenz respond to the growing needs of others in such a positive way, and then challenge others to do the same, that the Salvation Army is able to continue assisting the hundreds of families locally and nationally who seek our help, especially during this time of the year," said Major Estrada.

"The tradition of the Salvation Army collection kettles dates back to 1891. The tradition of people generously putting gold coins into kettles began in December 1982 when someone anonymously placed five, one-ounce gold South African Krugerrands into a kettle in a shopping mall near Chicago, explained Fuljenz during a keynote speech at the Salvation Army of Beaumont annual Life Changers banquet on November 9, 2010. At the conclusion of his remarks he donated and placed into a familiar, red collection kettle a 2010-dated United States Mint American Eagle one-ounce gold coin.

A video of the speech and gold coin presentation is available online at http://www.universalcoin.com.

Fuljenz is an award-wining numismatic author and a frequent interview guest on radio and television news and personal finance programs. He serves on the Board of Directors of the Industry Council for Tangible Assets.