The theme park Hall of Fame, which includes such luminaries as Walt Disney and Milton Hershey, posthumously inducted Holiday World's Will Koch this morning during the International Association of Amusement Parks & Attractions' annual convention in Orlando. 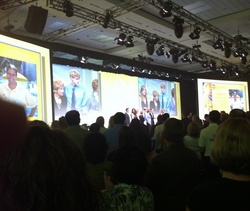 Will Koch's family accepts the Hall of Fame award in his memory at the IAAPA Expo in Orlando.

Koch was a savvy marketer. He enhanced Holiday World's family-friendly atmosphere by offering free parking, sodas, and sunscreen to all guests and he insisted the park be

The visionary who introduced “free unlimited soft drinks,” an extreme emphasis on friendliness and cleanliness, plus the world’s most popular trio of wooden roller coasters was inducted into the amusement industry’s Hall of Fame this morning.

Holiday World & Splashin’ Safari owner and president Will Koch, who passed away unexpectedly in June at the age of 48, was posthumously honored by his peers during opening ceremonies of the International Association of Amusement Parks & Attractions (IAAPA) Attractions Expo Conference and Trade Show. More than 25,000 IAAPA members from around the world are gathered to attend this week-long event.

According to an IAAPA news release: "Koch was a savvy marketer. He enhanced Holiday World’s family-friendly atmosphere by offering free parking, sodas, and sunscreen to all guests and he insisted the park be “open” with fans and the press alike. Under Koch’s leadership, Holiday World was one of the first major theme parks to actively embrace social media through blogs and Twitter, among other online platforms. The Hall of Fame honors leaders, legends, and pioneers for their significant and lasting contributions to the worldwide attractions industry."

“The IAAPA Hall of Fame is the highest honor our industry can bestow and includes such luminaries as Walt Disney and Milton Hershey,” says Koch’s brother, Dan, who became park president in late June. “Will’s family – including his park family – miss him dearly. We’re so proud of what Will created during his 20 years as president and pledge to continue to follow his vision in the years ahead.”

Will Koch’s widow, Lori, accepted the Hall of Fame award on behalf of her family. Their three children, Lauren, Leah, and William, were also on hand, along with Will’s mother, Pat, and brother, Dan. Will Koch’s father, Bill, was inducted into the IAAPA Hall of Fame in 2001.

Family-owned and -operated by the Koch family since opening in 1946, Holiday World & Splashin' Safari, in Santa Claus, Indiana, will celebrate their 65th anniversary in 2011. For more information about the parks’ 2011 season, visit http://www.holidayworld.com or call toll-free 1-877-463-2645.