New Mindfulness Software with Teachings by the Dalai Lama

A new version of "Stillness Buddy", a powerful mindfulness application that is helping thousands of people in over 75 countries, is now available with exercises, quotes and teachings by His Holiness the 14th Dalai Lama. Stillness Buddy helps people to be more relaxed and at peace, while working at the computer. 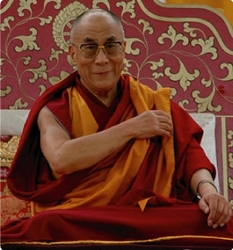 His Holiness the 14th Dalai Lama

It's like having a friend beside you who gently reminds you throughout the day to take a moment to pause, take a few deep breaths, center yourself and then continue.

We live in a busy world. At the first signs of stress and work pressure, it's all too easy to drop the very things that help to keep us centred such as revitalising exercise, meditation or going for a walk in nature. But what if there was a way to keep you on track, even in the midst of a demanding working day?

A new desktop application called “Stillness Buddy” may well be the start of a new era of healthier working, by bringing mindfulness practice into the workplace.

Used by thousands of people in 77 countries, Stillness Buddy runs in the background while you work at the computer. At regular intervals throughout the day (which you can adjust to meet your needs), the application encourages you to take very short pauses and follow some simple, yet effective exercises which leave you feeling relaxed and with a sense of inner peace.

In the words of Hector Bolanos, creator of Stillness Buddy, “It's like having a friend beside you who gently reminds you throughout the day to take a moment to pause, take a few deep breaths, center yourself and then continue.”

The newest version of Stillness Buddy contains practical exercises, quotes and meditations by His Holiness the 14th Dalai Lama. Widely recognized as both the spiritual and temporal leader of the Tibetan people, the Dalai Lama has earned the world's love and respect for his extraordinary dedication to peace, communication and compassion.

The very basis of the Dalai Lama's teachings are individual responsibility and embodying what he calls “our common human religion of kindness”. He regularly talks about the importance of human values such as compassion, forgiveness, tolerance, contentment and self-discipline.

Using Stillness Buddy will help you to be reminded of, and practice, some of the Dalai Lama's most important teachings on compassion and happiness, developing a sense of contentment, reflecting on the true nature of existence, the futility of negative emotions, and many more.

If you're looking for a way to prevent the build-up of work-related stress or if you're seeking a way to enhance your mindfulness practice, then having the Dalai Lama as your “Stillness Buddy” might be a step in the right direction.

A 14-day free trial and further information about Stillness Buddy can be found at https://www.stillnessbuddy.com
Notes for editors:

MindFree Ventures is a UK-based company founded in early 2009 by Hector Bolanos. Hector has been a keen spiritual practitioner for over 20 years and Buddhism has been one of his main influences.

Stillness Buddy was born out of Hector’s desire to bring stillness and peace to the workplace.

About His Holiness the Dalai Lama

Widely recognized as both the spiritual and temporal leader of the Tibetan people, the Dalai Lama was born in north-eastern Tibet in 1935. In 1950, Tibet was invaded by China, leading to His Holiness’s flight into India in 1959. Since then, His Holiness has resided in Dharamsala, India, the site of the Tibetan government in exile.

His Holiness the Dalai Lama is a man of peace. In 1989 he was awarded the Nobel Peace Prize for his non-violent struggle for the liberation of Tibet. He has consistently advocated policies of non-violence, even in the face of extreme aggression. He also became the first Nobel Laureate to be recognized for his concern for global environmental problems.

His Holiness has travelled to more than 62 countries spanning 6 continents. During his travels abroad, His Holiness has spoken strongly for better understanding and respect among the different faiths of the world. Towards this end, His Holiness has made numerous appearances in interfaith services, imparting the message of universal responsibility, love, compassion and kindness.

Since 1959 His Holiness has received over 84 awards, honorary doctorates, prizes, etc., in recognition of his message of peace, non-violence, inter-religious understanding, universal responsibility and compassion. His Holiness has also authored more than 72 books.

His Holiness describes himself as a simple Buddhist monk.

For additional details about Stillness Buddy and to arrange an interview with Hector Bolanos or a special reader discount, please contact Lizette Nauth (in the US & Canada) or tara Schebella (in Europe) - see contact details box.