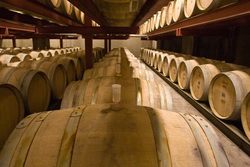 We measure tannin, total phenols and color on over a 100 different vineyards in Sonoma County and 2010 results are 10-15% higher in phenolic content than the five year average, so we're extremely excited about this year.

From the northern end of Sonoma County’s Sonoma Coast to the southern reaches of Carneros, positive reports are coming in regarding the outstanding and measurable quality of the winegrape crop this year in spite of one of the most challenging growing seasons in recent memory for the county’s 1,800 grape growers.

What is especially noteworthy as the harvest comes to a close is the general sense of excitement about the vintage. With the 2010 growing season and compressed harvest period in the rearview mirror, winemakers throughout Sonoma County are now able to talk about the quality of the grapes that came in and the wines that are beginning to ferment.

“In my 35 years as winemaker at Jordan, I’ve never seen fruit quality this good,” said Rob Davis, winemaker at Jordan Vineyard and Winery in Alexander Valley. “The flavors are complex and intense, offering tannin content that is so beautifully balanced.”

Sonoma County is generally heralded as a cool climate wine region for producing wines with great balance and character, but the scale is tipped even further in favor of those attributes in the 2010 vintage than a more ‘typical’ growing year. There is palpable excitement among Sonoma’s vintners as they discuss their wines from 2010 vintage.

It is also important to note that despite isolated cases of grape damage, overall yield county-wide is estimated to be just 10-15% below average. According to Nick Frey, president of the Sonoma County Winegrape Commission, “2010 was a difficult and costly year for many grape growers, but I still think the harvest will come in above the 2008 crop when only 168,000 tons were harvested.”

Outstanding Quality and Concentration
The long cool growing season of 2010 allowed great acid retention in the fruit and extended time for flavor development without the higher sugar levels associated with warmer growing conditions. The warm weather in October was timed perfectly to bring the fruit to the needed ripeness levels.

“As far as I am concerned this has been one of the most successful harvests in years on Alexander Valley Mountain,” said Graham Weertz, winemaster at Stonestreet Winery. “At this early stage we are celebrating the vintage for its awesome quality. The Cabernet Sauvignon fruit has ripened to its maximum potential at lower alcohol levels resulting in great balance and texture from fully ripe fruit.”

Lower Alcohol Levels
Slower ripening at cooler temperatures resulted in the 2010 harvest being physiologically ripe with fully matured tannins, but with lower sugar levels, and consequently lower alcohol levels overall. This makes them more food-friendly and suited to a broader array of pairings.

“What we are seeing is rich flavors and low sugars that will create beautifully complex full-bodied wines with lower alcohol levels,” said Randy Ullom, winemaker for Kendall-Jackson. “All in all, the 2010 Harvest has the ability to be an extremely exceptional vintage. It is quite exciting.”

Great Color and Acidity:
For those who like to see the numbers behind the claims of deeper color, good natural acid levels, and lower alcohol levels, winery laboratories and independent labs throughout Sonoma County have the statistics to back it all up.

Each winery has an individual harvest experience, but there seems to be general consensus related to high grape quality throughout Sonoma County. “The thousands of Sonoma County samples we’ve seen from this year through our Healdsburg and St. Helena laboratories show exceptional fruit maturity, acidity, color, tannins, and other quality indicators despite this being one of the latest and most condensed harvests we’ve seen over the past 35 years,” said Gordon Burns, president and technical director of ETS Laboratories.

“We measure tannin, total phenols and color on over a 100 different vineyards in Sonoma County and 2010 results are 10-15% higher in phenolic content than the five year average, so we're extremely excited about this year,” said Corey Beck, general manager and winemaker at Francis Ford Coppola Winery in Geyserville. “Everything from Dry Creek Zinfandel to Alexander Valley Cabernet looks amazing in the tank and in many ways this vintage will be compared to 1999 which was also a cooler growing season.”

Dan Goldfield, co-proprietor of Dutton-Goldfield Winery in the Russian River Valley, summed up the sentiments of many Sonoma County winemakers regarding the 2010 vintage very succinctly: “In the end, this was another vintage where attentive reaction to what the world gives us, both in farming and in the winery, was a great skill to have. Our job is to reflect the personality of our place and the seasons of it, and I'm thrilled with how we did so in 2010. Now can I sleep?”

About Sonoma County Vintners
Sonoma County Vintners is the leading voice of Sonoma County wine, dedicated to increasing awareness and improving the quality image of its wines to consumers, media, and trade locally and globally. With almost 65,000 vineyard acres planted among the county’s 13 American Viticultural Areas (AVAs), Sonoma County is considered one of the world’s premier winegrowing regions, producing an unparalleled range of varietals and wine styles. SCV has promoted this diversity and quality since 1944, and currently represents more than 165 member wineries and 25 Affiliate Members. For more information on the wines and wineries of Sonoma County, visit http://www.sonomawine.com.

About Sonoma County Winegrape Commission
The Sonoma County Winegrape Commission was established in 2006 as a non-profit marketing and educational organization dedicated to the promotion of Sonoma County as one of the world’s premier grape growing regions. SCWC’s goal is to increase awareness and recognition of the quality and diversity of Sonoma County’s grapes and wines through dynamic marketing and educational programs targeted to wine consumers around the world. For more information about SCWC and its programs, visit http://www.sonomawinegrape.org
CONTACT: Sara Cummings
Sara(at)sonomawine(dot)com / 707.888.6150