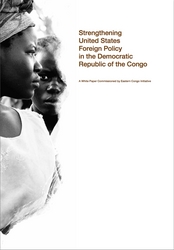 “To secure the peace, we must continue to support local leadership and trust their ability to manage their own organizations.” Eastern Congo Initiative Founder Ben Affleck

Eastern Congo Initiative (ECI) is proud to release today "Strengthening United States Foreign Policy in the Democratic Republic of the Congo," a white paper presenting actionable policy recommendations for the United States to take a leadership position that ensures the future stability and prosperity of the region.

Confronting the legacy of child soldiers, rampant sexual violence and shattered economic infrastructure following the world's deadliest war since World War II, Congo has recently made notable strides re-establishing a functioning civil society. However, securing the gains of recent elections requires continued support from the United States and the international community to afford the Congolese people the resources necessary for a peaceful and prosperous future.

"Strengthening Congolese rule of law and stabilizing civil society requires strong leadership and a more holistic approach from the United States--one that looks beyond the immediate symptoms of recent atrocities in eastern Congo to the structural causes of the instability," said ECI Founder Ben Affleck in a November 30 editorial in the Washington Post. "To secure the peace, we must continue to support local leadership and trust their ability to manage their own organizations."

Recognizing the complexity that led to the conflict and the nuanced diplomacy that ushered in the current era of peace, the white paper was commissioned by ECI to advance policymakers' understanding of the policy rationales for the United States leadership in securing the peace, security, and rule of law in Congo; and create a valuable tool from which sustainable solutions can be drawn. Reviewed by several leading regional experts from government, the NGOs, the private sector and academia, ECI is confident that the recommendations draw from the sharpest possible understanding of both the on-the-ground realities in Congo and foreign policy interests of the United States.

"As this important report clearly states, the U.S. needs to lead now in getting real results on the two central issues facing the Congolese people: the continuing massive abuse against civilians, including young girls and women; and the extremely weak commitment to democratic development from many Congolese senior officials," said Anthony Gambino, independent consultant and expert former USAID mission director for the Democratic Republic of the Congo. "With U.S. leadership, the unacceptable level of abuse could begin a steady decline and the country's democratic progress could be maintained. In the absence of consistent U.S. leadership, Congo's present dangerous drift could lead to yet another regional conflict and humanitarian catastrophe."

The paper marks another milestone in Washington's growing commitment to improve the situation in Congo: July 2010 saw the passage of the Dodd-Frank Act's requirements for reporting the origin of potential conflict minerals from the resource rich nation. Harnessing that momentum, the paper's nine recommendations for the Obama Administration and incoming Congress build on existing mandates wherever possible, including:

1.     Appoint a new head of the existing Office of Special Advisor for the Great Lakes region with the mandate to renew political dialogue.
2.     Effectively implement the provisions in the Dodd-Frank Act designed to strengthen enforcement sanctions related to conflict minerals.
3.     Continue to provide technical assistance and take the steps necessary to ensure the appropriate environment for the upcoming elections.
4.     Support Congo's efforts to deploy administrative and judicial reforms to root out political interference, stop corruption and foster the rule of law.

"Following the leadership of the United States, the world can ensure that Congo never again experiences the horrific violence and shameful exploitation that defined much of its last two decades," Affleck said. "Through continued bipartisan support and a commitment to reinforcing the emerging civil infrastructure, I am confident that leadership in the U.S. and DRC will realize a vibrant Congo with abundant opportunities for economic and social development."

In addition to the white paper's release, ECI and the Center for Strategic International Studies (CSIS) will be hosting a panel discussion to assess the current situation in Congo, react to the recommendations, and provide commentary on Congo's present and future.

Following an introduction of the white paper by Mr. Affleck, CSIS Africa Program Director Jennifer Cooke will moderate a bi-partisan panel that will include Assistant Secretary of State for the Bureau of African Affairs Johnnie Carson, and Senator-elect John Boozman (R-AR), and Mr. Gambino. Chairman of the Senate Committee on Foreign Relations Senator John Kerry (D-MA) will offer the event's closing remarks.

The event is open to the press. For white paper inquiries and event RSVP please contact:

For more information on the situation in eastern Congo, the white paper, or the event, please visit EasternCongo.org.

The Eastern Congo Initiative is an advocacy and grant-making initiative wholly focused on working with and for the people of eastern Congo. ECI provides support for Congolese organizations working to develop community-based approaches that create a sustainable and successful society in eastern Congo.

Strengthening United States Foreign Policy in the Democratic Republic of the CongoAn Urgent Call to Action, this white paper provides a actionable policy recommendations for the United States to take a leadership position that ensures the future stability and prosperity of the region.