The Indiana Office of Tourism Development and the Koch family announce the creation of the Will Koch Indiana Tourism Leadership Award. Nominations are being sought through January 10, 2011. 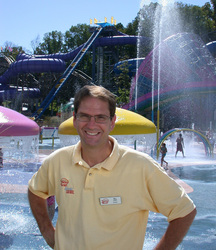 Will Koch was president and CEO of Holiday World & Splashin' Safari in Santa Claus, Indiana

The Indiana Office of Tourism Development and the Koch family announce the creation of the Will Koch Indiana Tourism Leadership Award. Nominations are currently being sought through January 10, 2011.

The new award is named for the late Will Koch, long-time owner and president of Holiday World & Splashin’ Safari and chief executive officer of its parent company, Koch Development Corporation. It celebrates and pays tribute to Koch’s business and philanthropic achievements, recognizes outstanding accomplishments in economic and community development through tourism and showcases the important role tourism plays in a diversified economy.

“Will Koch worked tirelessly to make Indiana a wonderful place to live and visit,” said Lt. Governor Becky Skillman. “It is fitting to recognize exceptional partners in the tourism business community with an award dedicated to a great man and true leader.”

An award will be given annually to a deserving Hoosier who demonstrates the following qualities:

“We are touched by the opportunity to commemorate my brother’s devotion to his life’s work and his lasting impact on the State of Indiana,” said Dan Koch, the park’s new president. “It is comforting to know his legacy will live on through the meaningful work of fellow Hoosiers.”

Nomination forms are available on the Office of Tourism’s industry-focused website, tourism.IN.gov. Completed forms and required documents are due by 4 pm EST on January 10, 2011. The Indiana Office of Tourism Development will work with the Koch family and a group of representatives from the tourism industry to review nominations and select a winner. The award will be presented during the Hoosier Hospitality Conference in March.

About Will Koch:
Born and raised in Santa Claus, Koch graduated from Notre Dame University and received his master’s degree from the University of Southern California. Under his leadership, Holiday World & Splashin’ Safari have become an award-winning destination with annual visitation exceeding one million per year. The park’s economic impact on Spencer County is $161.7 million. Koch also served as president of the Lincoln Boyhood Drama Association, which worked with the State of Indiana to reopen the Lincoln Amphitheatre in 2009 with a new drama honoring the bicentennial of Abraham Lincoln’s birth. In addition, he helped initiate and lead a grassroots campaign to “Save Indiana Summers” and address the effects of an ever-earlier school start date. He passed away in June 2010 at age 48.

About Indiana’s tourism industry:
Tourism is a big industry comprised of many small businesses that provide positive and significant contributions to Indiana’s economy. Annual spending from more than 62 million visitors exceeds $10 billion in Indiana. The industry generates more than $1 billion in local and state tax collections from visitor expenditures. It also creates one in 10 jobs and employs approximately 257,000 Hoosiers.