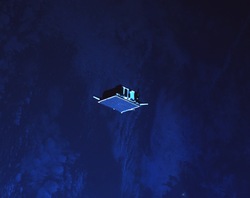 The PRISMA mission has provided a unique opportunity to demonstrate the High Performance Green Propulsion (HPGP) system in space … [This] has emerged as an enabling technology for improved performance, … and significantly shorter launch preparations.

Princeton Satellite Systems, Inc. has teamed with the Swedish Space Corporation to offer a new on-orbit testbed to demonstrate rendezvous, formation flying, collision avoidance and general close-proximity operations. This testbed is the two-satellite PRISMA mission, consisting of the Mango and Tango spacecraft. Launched together on June 15, 2010, into a sun-synchronous orbit at 725 km, the spacecraft have separated and have successfully begun a series of experiments to demonstrate various forms of proximity operations and several new hardware components.

Using both differential GPS and visual based sensors for relative navigation, along with a new high performance green propellant (HPGP) and MEMS microthrusters for orbit maneuvers, the PRISMA spacecraft are equipped to perform precise relative orbit control for years to come. Once the nominal mission timeline has commenced in mid-2011, PRISMA will be available as an on-orbit testbed for tailored user experiments.

Together, the Swedish Space Corporation (SSC) and Princeton Satellite Systems (PSS) are providing an opportunity for U.S. organizations, and now foreign organizations as well, to use the PRISMA spacecraft as an on-orbit testbed. Customized experiments may be designed by the customer with guidance from the SSC/PSS team. Potential experiments would include upload and onboard use of experimental flight software, designation of relative orbit trajectories with ground-in-the-loop control, and post processing of sensor data obtained during tailored relative motion. This presents a unique opportunity to rapidly and economically advance the TRL of various kinds of emerging technologies that are pivotal to distributed satellite operations.

The team is now actively seeking user experiments with PRISMA that involve both short term, commercial-based ventures, as well as longer-term commitments and cooperation based on a joint and mutual interest. A white paper describing the process of defining and integrating a user experiment on PRISMA is available at http://www.psatellite.com/prisma. Please contact Joseph Mueller at Princeton Satellite Systems for more information: jmueller(at)psatellite(dot)com.