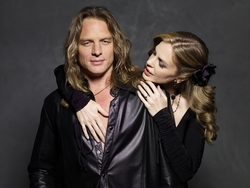 It’s a musical story. My music has been described as fluid and poetic, and I look forward to sharing it with music lovers of all ages.

South African native Abri van Staten has released his latest album Sunlight and Shadows. Sunlight and Shadows is an 11 track, emotion filled CD, featuring van Straten’s talents as a singer/songwriter. Each track has its own unique style, yet the album comes together as a whole to create a complete finished piece. The CD has been compared to James Taylor and Sting with his classical guitar style and his relaxing, beautiful voice.

Commenting on the new album, Van Straten said, “It’s a musical story. My music has been described as fluid and poetic, and I look forward to sharing it with music lovers of all ages.”

Abri van Straten was born in South Africa, and has been the lead singer, guitarist, and songwriter of the South African group, The Lemmings. The group has toured Europe, Scandinavia, and most recently the US, recorded four CD's and performed over one thousand shows.

The song from the album “Voices” was written for and donated to IFAW, the International Fund for Animal Welfare, to help them fight the illegal practice of whaling. Abri met IFAW through his wife and was moved by their persistent and effective programs. For a limited time Abri and Kristin are offering personalized autographs with every purchase of the CD from BauervanStraten thru Amazon.

Sunlight and Shadows is available at ITunes and http://www. http://www.cdbaby.com/cd/AbrivanStraten1. For more information visit http://www.abrivanstraten.com.