Extraordinary Complexity of the Project convinced the Jury 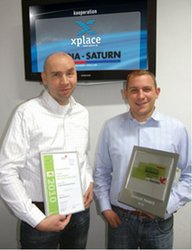 We are extremely proud and honored to receive this award. We are pleased that with this concept we can not only convince stores to adopt our Instore-TV solution, but have also been recognized by this prestigious international jury.

The Instore-TV-Concept of xplace GmbH has won the prestigious 4th Digital Signage Best Practice Award in the category of “Special Prize.” In front of about 500 industry colleagues, Michael Volland, Managing Director of xplace, received the award on Dec. 10 in the historic Ratskeller of the Frankfurt Town Hall. The unique complexity of the Instore-TV project convinced the jury to award this to xplace.

“We are extremely proud and honored to receive this award. We are pleased that with this concept we can not only convince stores to adopt our Instore-TV solution, but have also been recognized by this prestigious international jury,” said Michael Volland, Managing Director of xplace. “Our thanks go to both our client, the Media-Saturn group, with whom we have developed this concept, as well as to our employees, without whom we would have not been able to have achieved this project, and the jury, which has rewarded us this prize for our continuing innovation."

The Instore-TV-concept is a solution that offers the complete in-store communications for Media-Saturn-Holdings (MSH). It is unique in its size and complexity. Within a year, more than 800 stores in 16 European countries will be equipped with this Instore-TV system in their own particular language. In the stores, sales-supporting content is presented to all customer groups, with an average of 10 channels available to display multiple information parts around the store.

The program can be managed both centrally and locally based upon the appropriate access rights. (PRWEB) December 14, 2010 -- Scala, the software behind the concept, has been delivered by Scala Development Partner SEEN MEDIA, Aachen, who safeguards necessary second-level technical support, as well as additional content development as required.

The final decision and award ceremony took place during the Viscom show. Since 2007, the international trade fair for visual communication promotes the medium of digital signage with its own prize. This is awarded in five categories jointly to the customer of a project, as well as the contractor. In addition, the jury may also award a special prize for particularly innovative projects. The award is regarded by many as the most valuable award for digital signage projects in Europe.

About xplace GmbH
xplace GmbH is located in Göttingen, Germany and is a specialist in interactive customer information systems for the retail market. With a specially developed software platform, the company offers a versatile information system, which is used both on digital advertising displays and information kiosk terminals. With simple one-touch screen selections, consumers can obtain extensive information about music, films, computer games and audio books, as well as numerous other product groups such as mobile phone tariffs, printer cartridges, mobile phones, recipe ideas, wine or spirits). xplace provides simple and effective tools to their customers, which can advise consumers at the POS optimally and assist with their buying decisions.

In addition to software and hardware solutions, the company provides and maintains high-quality digital content. As a member of the Pironet NDH Group, xplace GmbH cooperates with numerous medium-sized technology companies in areas such as couponing and business intelligence. Originally formed in 2002 and 2003 as two separate companies (Advertimes and Advertools), xplace GmbH was formed in 2008 following the merger and currently employs approximately 130 employees.

Besides having its headquarters in Göttingen, the company is represented throughout Europe with a comprehensive network of sales partners. More information: http://www.xplace.de

About SEEN MEDIA
SEEN MEDIA looks back to almost 10 years of practical experience in digital signage installations, operates actually more than 3,500 of such installations in 90 countries and has delivered more than 7,000 PC Systems for POS/POI installations. http://www.seen-media.com

About Scala
Driving more than 500,000 screens worldwide, Scala is the world’s leading platform for content creation, management and distribution in digital signage networks and the first unified platform for advertising management of both traditional and digital signage networks. The company's digital signage customers include Rabobank, IKEA, Burger King, T-Mobile, Virgin MegaStore, Warner Brothers, The Life Channel, Rikstoto, Repsol, NorgesGruppen, Audi, ECE Flatmedia, Kaufhof (Metro Group) and thousands more. Advertising management customers include CBS Outdoor, Clear Channel Outdoor and Magic Media, among others. Scala is headquartered near Philadelphia, USA, and has subsidiaries in Canada, The Netherlands, France, Norway, Germany and Japan, as well as more than 500 partners in more than 60 countries. More information is available at http://www.scala.com.