Journey to Virginland: A Revolutionary American Novel Just Published and is Available Worldwide

A modern-day Diogenes, Dog, confronts God and, through a devilishly iconoclastic story line, and always unapologetically in your face, negotiates the perilous waters of the post-9/11 landscape, shedding fresh light on the deep-rooted interconnections of state propaganda, global capital, the impulse for empire, sexual politics, and religious zealotry. Journey to Virginland unravels the very fundamentals of religion and civilization. This work stands apart by its entrancing and transformative power. 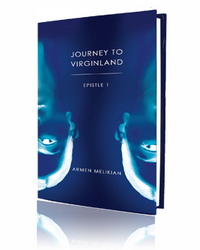 Journey to Virginland: Epistle I

"THIS IS THE BOOK THAT AMERICA NEEDS IN ORDER TO SURVIVE"~~Paul McCarthy (25 years Senior Acquisitions Editor at Simon & Schuster, Harper Collins, and Doubleday)

Journey to Virginland: Epistle I, the highly anticipated debut novel by the American author Armen Melikian, has just been released in hardcover edition and is available at Barnes & Noble bookstores in the United States and several major booksellers worldwide, announced Emily Weiss at Two Harbors Press.

Set in the fictional Republic of Virginland, Melikian's novel tells the story of Dog, the impish antihero who distills his personal odyssey of self-discovery into a formidable, eminently cogent critique of our time's breakneck paradigm shifts.

An unapologetic creature of the street, endowed with near-encyclopedic knowledge and a bona fide bastard's ruthless wit, Dog parses the monolith of collective hallucination by laying bare the mortally shoddy building blocks and constructs of national tradition, social mores, and cultural positioning as well as the untouchable dogmas which cement them.

As he proceeds to expose the sacred cows ensconced in various tiers of the societal pecking order, Dog intersperses his critique with a personal quest for meaning and identity which takes him from Virginland, his spiritual ground zero, to the farthest reaches of the Western world and back again, through rumination and flashback. Dog populates the journey with an evolving procession of loves, sexual liaisons, run-ins with officialdom, and face-offs with gatekeepers of culture, institutionally sanctioned literature in particular.

Melikian's core enterprise is to draw out zestful, often tongue-in-cheek, yet always supremely versed discourse on the overarching issues of our time via the essentially picaresque narrative of an enlightened scoundrel. What the reader may not necessarily suspect at the outset of the novel is that the key factor which animates Dog's energies, no matter how dastardly they might seem, is a profound vulnerability tinged with the sorrows of loneliness, alienation, and the irreducible yearning for "home." Thus Journey to Virginland is punctuated with passages of achingly beautiful emotional resonance, whereby the palpable human toll of the social and cultural ills broadsided by the author are made manifest.

Journey to Virginland has already earned international critical acclaim. In his review of the novel, Paul McCarthy, a New York Times bestselling author and professor of literature at the University of Ulster, Ireland, writes: "In the best sense, I'm reminded of George Orwell's classics, and other authors of similar stature, though there is no true parallel possible with a novel as unique in concept and execution as Journey to Virginland."

McCarthy continues: "In this extraordinary book, there is so much originality in every way, and so many levels and depths of meaning, theme, narrative, etc., that I had to keep slowing my pace, until I could read and 'inhale' each word."

A foremost attribute which sets Journey to Virginland apart from so-called novels of ideas is its equally exuberant and erudite portrayal of the post-9/11 human condition, making for a sustained sense of urgency which airily steers clear of the professorial or ponderous. Indeed, Melikian is a master of registering our most fundamental discontents through the prism of the here and now, even while carving out entire vistas of background analysis.

It is armed with this modus operandi that the author takes to task today's obdurate obstacles to human self-actualization and fulfillment, including a globalism run amok, imperialist hubris posing as cultural benevolence, corporate greed and the widening altar of consumerism, powerhouses of organized religion more than ever intolerant of intellectual and spiritual freedom, and oppressive gender politics based on "national tradition."

An illustration of Melikian's critical observations is the following passage of the ruminations of Dog, the antihero:

"It was not naked prejudice with which I collided every hour, wondering why I should have been the butt of destiny's whim. This by itself was a mise en scene that impresses a question mark on Nietzsche's forehead: Who is the privileged who can become a superman? Who is the one who can afford culture?

"What gives, yao, to vituperate against slave morality instead of beheading the creators of the objective conditions that give rise to slave morality? And how to achieve Schopenhauer's state of painlessness when the whole gamut of social existence has conspired against you from birth to death? The choices are literally between transcendence and self-destruction, even through revolt. And as long as there are oppressors in the world of men, the fake currency of saviors will be in high demand."

While Dog's peregrinations, geographical and otherwise, cede a plethora of such observations, laced invariably with deadpan humor and the pain of personal experience, they are subsequently elucidated across a deeper pane still, as the protagonist expands the conversation with intricate commentaries on philosophy, religion, history, art, mythology, language, and lore.

The net effect of Melikian's novelistic project is a certain regenerative clarity which points at the indisputable possibility of self-liberation. When all is said and done, what presents itself to the reader is a breathtaking vision of human transformation, as naturally arrived at and necessary as day following night.

The book site, http://www.JourneyToVirginland.com , includes a partial list of worldwide vendors that already carry the book. The site also contains an excerpt and a satirical map of the world by Dog--where locale names may often stand for their inverse, and can be freely downloaded.

About the author: Armen Melikian holds a Master's degree in International Relations from American University in Washington, DC. He has also studied mathematics at a number of colleges including Harvard. Abandoning both politics and science, he has instead devoted himself to literature. Journey to Virginland is his debut novel. Melikian lives with his wife in Los Angeles. To read more about the author, click here.