A Glimpse into the Rich History of Bratislava 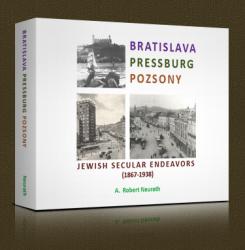 Using his years of experience and in-depth research, author A. Robert Neurath brings to life the historical events that shaped one of today’s most fascinating cities. In BRATISLAVA PRESSBURG POZSONY: Jewish Secular Endeavors (1867-1938), his new picture book released through Xlibris, he profoundly touches on Slovakia’s capital city.

Unknown to many, Bratislava, presently the capital of Slovakia, used to be in the Habsburg Austro-Hungarian Monarchy, a multi-national city. German, Hungarian, and Slovak-speaking residents represented the majority of the population, explaining why the city had multiple names – Pressburg, Pozsony, and Bratislava. But it took a long time before the Jewish community in this city was given the same privileges and rights that other religious groups enjoyed. Legal emancipation of Jews was achieved in 1867, after the conversion of the Empire into the Dual Austro-Hungarian Monarchy (Bratislava being in the Hungarian part).

Having lived in this city for thirty-one years, Neurath, through this book, valiantly attempts to capture the story of the emancipated Bratislava Jews and their vital contributions to the city's economy, culture, education, and political life. A richly layered book about history and non-religious endeavors, BRATISLAVA PRESSBURG POZSONY: Jewish Secular Endeavors (1867-1938) offers a fascinating narration that begins with architecture, providing documents “written in stone”, and continues with the arts, sports, politics, business, and medicine. It is an informative page-turner perfect for teachers, students, and anyone who wants to learn about the history of a captivating city and its extinguished and dispersed Jewish population.

This book will also be available in Black and White and E-book versions soon. For more information on BRATISLAVA PRESSBURG POZSONY, interested parties may log on to http://www.Xlibris.com.

About the Author
A. Robert Neurath, PhD, was born in Bratislava, Czechoslovakia. He graduated from the Technical University (Bratislava) in 1957. He immigrated to the United States in 1964, and was awarded a doctorate in microbiology at the Technical University, Vienna, Austria, in 1968. For over forty-five years, he was engaged in research on viruses: influenza, rabies, hepatitis B, the human immunodeficiency virus I, and on vaccines against these viruses. His studies resulted in about 250 scientific papers, including monographs and book chapters, and twenty-three patents. After the demise of communism, he had the opportunity to visit Bratislava and to read new books dealing with the city’s past Jewish community. These publications, as judged by the author, have given insufficient credit to the secular endeavors and accomplishments of the local Jewish professionals and businessmen before the onset of World War II. The author strives to rectify these apparent deficiencies relying mostly on pre-war information and input from family and friends. The present book is the result of these efforts.