Each Christmas, adults and children alike delight at the story of the kings from the East who followed the star to Bethlehem to offer gifts to the newborn Christ. While this familiar tale is recorded in the Gospel of Matthew, another little-known version later emerged that claimed to be the eyewitness account of the wise men. 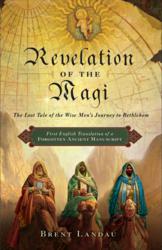 Revelation of the Magi by Brent Landau

Told from the perspective of the Wise Men themselves, a distinct prophecy and tradition thousands of years old comes to light.

Everyone knows the story by heart: A star, the most brilliant star of all, shines above Bethlehem. By its light, three Wise Men make their way to a tiny manger. There they bestow gifts of gold, frankincense, and myrrh on the newborn baby Jesus. This Christmas season, a new book, The Revelation of the Magi: The Lost Tale of the Wise Men’s Journey to Bethlehem(published by HarperOne, on-sale now), sheds new light on the beloved tale.

The Gospel of Matthew reveals little about the Wise Men who trek from the east; all we know about these mysterious figures come from just a few verses. Now, the translation of a little-known, ancient manuscript uncovered in the Vatican Library provides stunning insight on how and why the Wise Men were compelled to travel from afar and what becomes of them when they return home.

Told from the perspective of the Wise Men themselves, a distinct prophecy and tradition thousands of years old comes to light. The prophecy states that “a star of indescribable brightness will someday appear, heralding the birth of God in human form.” The Revelation of the Magi goes so far as to name twelve travelers, not three, who journey to Bethlehem upon the star’s appearance.

The Christmas story, in one of its earliest versions, is guaranteed to astonish and delight. To be sure, The Revelation of the Magi by Brent Landau adds a rich, new layer to one of the greatest stories ever told.

Author Brent Landau will be a guest on a full hour of The Diane Rehm Show (WAMU)on December 20th and the book will be featured in a Nightline special on Bethlehem during the week of Christmas.

The Revelation of the Magi is part of HarperOne Publisher's suggested holiday titles, along with:

The Alchemist: A Graphic Novel (SEE VIDEO)
Paulo Coelho
A beautifully rendered graphic novel of the classic that continues to inspire readers worldwide. And don’t forget The Alchemist – Gift Edition!

Be Love Now: The Path of the Heart
Ram Dass
From the author of the counter-culture bible Be Here Now comes this transformational teaching of a forty year journey to the heart.

An Altar in the World: A Geography of Faith
Barbara Brown Taylor
The acclaimed author of Leaving Church reveals how to encounter the sacred as a natural part of our lives.

A Classic Christmas
An elegant offering for the Christmas season mixing spiritual reflections with classic literature and verse.

Pocket Companion to Narnia: A Guide to the Magical World of C.S. Lewis
Paul F. Ford
For readers of all ages, this handy pocket sized edition will guide you seamlessly through the enchanting and timeless world of C.S. Lewis’s Narnia.