"Jim Henson's Fantastic World" offers a rare peek into the imagination and creative genius of the creator of Kermit the Frog, Big Bird, Bert & Ernie, and other beloved characters. The exhibition features 100 original artworks, including drawings, cartoons and storyboards that illustrate Henson’s talent as a storyteller and visionary. 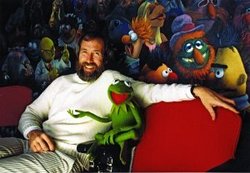 Henson and His Characters. Photo by John E. Barrett, courtesy of The Jim Henson Company. Kermit the Frog, The Muppets Studio, LLC.

"Jim Henson's Fantastic World" presents more than 100 objects including his beloved puppets, as well as television and movie props, photographs of Henson and his collaborators at work, and original video.

"Jim Henson's Fantastic World" offers a rare peek into the imagination and creative genius of the creator of Kermit the Frog, Big Bird, Bert & Ernie, and other beloved characters. The exhibition features 100 original artworks, including drawings, cartoons and storyboards that illustrate Henson’s talent as a storyteller and visionary.

“Jim didn’t think in terms of boundaries at all the way the rest of us do. There are always these fences we build around ourselves and our ideas. Jim seemed to have no fences.”
-Jon Stone, Sesame Street producer and director

Without “fences” to limit where his imagination could roam, Jim Henson (1936-1990)—artist, puppeteer, film director and producer—created elaborate imaginary worlds filled with unique characters, objects, environments and even languages and cultures. His work is enjoyed in dozens of languages in more than 100 countries. “Jim Henson’s Fantastic World,” a new exhibition from the Smithsonian Institution Traveling Exhibition Service (SITES) and The Jim Henson Legacy, offers a rare peek into the imagination and creative genius of this multi-talented innovator and creator of Kermit the Frog, Big Bird and other beloved characters.

“Jim Henson’s Fantastic World” opens at the National Heritage Museum, 33 Marrett Road in Lexington, MA on April 3, 2010 and will remain on view through June 27, 2010. Admission is free.
.
The exhibition features 100 original artworks, including drawings, cartoons and storyboards that illustrate Henson’s talent as a storyteller and visionary. Among the variety of exhibition objects are puppets, and television and movie props, photographs of Henson and his collaborators at work and original video productions, including excerpts from Henson’s early career and experimental films.

“It’s such a treat to get to know Jim Henson through his doodles and drawings, his puppets and his fantastic performances,” said Karen Falk, curator of the exhibition and archivist at The Jim Henson Company. “I’m delighted to be able to share this inspiring and entertaining experience with people all over the country. Seeing his original work firsthand opens a window into his visual thinking and provides both an appreciation of Jim as an artist and a reason to laugh out loud.”

From the very beginning, Henson expressed his ideas with incredible bursts of invention, through a variety of visual forms, clever dialogue, songs, comic bits and animation. All of his work reveals a highly sophisticated and nuanced thought process, evident in the decades-long metamorphosis of a small group of captivating characters from simple doodles to cartoons to puppets to films. What began as a one-man enterprise eventually grew into an international phenomenon. As time passed, the simple hand puppets Henson created for his first television show, “Sam and Friends,” evolved into increasingly more sophisticated characters—from the Muppets of “The Muppet Show,” “Sesame Street” and “Fraggle Rock” fame to the larger-than-life fantasy creatures of “The Dark Crystal” and “Labyrinth.”

“Jim Henson’s Fantastic World” is organized by The Jim Henson Legacy and SITES, in cooperation with the Henson Family; The Jim Henson Company; The Muppets Studio, LLC; and Sesame Workshop. The exhibition is made possible by The Biography Channel. Additional support has been provided by The Jane Henson Foundation and Cheryl Henson.

The Biography Channel is a 24-hour digital cable network dedicated to presenting compelling stories about the world’s most interesting people. One of the most sought after and fastest growing channels available today, The Biography Channel presents vibrant profiles of intriguing individuals, plus exciting new original series, short features and documentaries. For more information, visit http://www.biography.com.

Established in 1993, The Jim Henson Legacy was created by family and friends in response to the extraordinary interest in the life and work of Jim Henson. The organization is dedicated to preserving and perpetuating Henson’s contributions to the worlds of puppetry, television, motion pictures, special effects and media technology. By making Henson’s creative body of work available to the public through presentations and exhibits, the Legacy will share the power of Henson’s art and imagination and his positive view of life with generations to come.

SITES has been sharing the wealth of Smithsonian collections and research programs with millions of people outside Washington, D.C., for more than 50 years. SITES connects Americans to their shared cultural heritage through a wide range of exhibitions about art, science and history, which are shown wherever people live, work and play. For more information, including exhibition descriptions and tour schedules, visit http://www.sites.si.edu.

The National Heritage Museum is dedicated to presenting exhibitions and programs on a wide variety of topics in American history and popular culture. The Museum is supported by the Scottish Rite Freemasons in the Northern Masonic Jurisdiction of the United States. The National Heritage Museum is located at 33 Marrett Road in Lexington, at the corner of Route 2A and Massachusetts Avenue. Hours are Monday through Saturday from 10 am–4:30 pm, and Sunday, noon–4:30 pm. Admission and parking are free. Heritage Shop and Courtyard Café on site. For further information, contact the Museum at (781) 861 6559 or visit the web site at http://www.nationalheritagemuseum.org.

Bert & Ernie. Photo by John E. Barrett. Trademark and © SesameWorkshop. All Rights Reserved.Jim Henson believed that television and film could be used in a positive way to shape the thoughts of children and adults. He populated the neighborhood of Sesame Street with characters such as Bert and Ernie.

Snowths & Mahna Mahna. Photo by John E. Barrett. © The Muppets Studio, LLC.Originally debuting on The Ed Sullivan Show, the bearded hippie Mahna Mahna and his cow-like back-up singers, the Snowths, went on to become regulars on Sesame Street and The Muppet Show