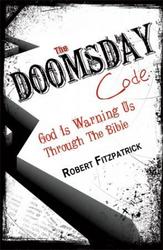 God will be saving only a small percentage of the earth's population: only 200 million people

Mankind has only one book that can prove itself to be the Word of God; that book is the Bible. God took more than 1,500 years to write it and now, more than 1,900 years after its completion, God has “unsealed” the Bible to reveal astonishing secrets it contains about the end of the world. In this day and age, God is using His ambassadors to warn the world that its time is almost over, and that they must be reconciled to Him or face the evil He is about to bring: five months of hell on earth. In his new Xulon Press book, The Doomsday Code: God Is Warning Us Through the Bible ($20.99, paperback, ISBN # 978-1-60957-121-4), Mr. Robert J. Fitzpatrick provides mathematical proof that the Bible is now revealing the date for the start of Judgment Day—May 21, 2011—when there will be a devastating global earthquake.

“God will be saving only a small percentage of the earth’s population: only 200 million people,” the author says. “These will be people who have cried out to God for mercy, so this is what we all need to do. People won’t want to make any long range plans after they read the proof that we are so near the end of the world. That will be on October 21, 2011, although no one will want to be here after May 21, 2011.”

Fitzpatrick, who formerly prepared engineering contract specifications for a living, could not help but be amazed at the way God chose and used His words to write the Bible. About three years ago, he began working on his book. It is his hope that this work will resonate with readers of all stripes, bringing them to a saving knowledge of Jesus Christ before it is too late.

Xulon Press, a division of Salem Communications, is the world’s largest Christian publisher, with more than 7,000 titles published to date. Retailers may order The Doomsday Code through Ingram Book Company and/or Spring Arbor Book Distributors. The Doomsday Code is available online through xulonpress.com/bookstore, amazon.com, and barnesandnoble.com.