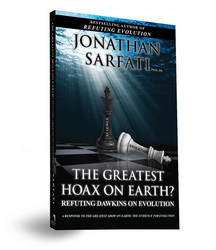 The Greatest Hoax on Earth? Refuting Dawkins on Evolution

“In my opinion Sarfati’s book beats Dawkins’ book, point by point, on all issues.” Dr. John Sanford, Cornell professor and inventor of the gene gun

Dr. Jonathan Sarfati, author of the world's best-selling creation book, takes Dawkins on head to head in the book "The Greatest Hoax on Earth? Refuting Dawkins on Evolution". Dr. Sarfati thoroughly exposes the bankruptcy of Dawkins’ arguments and scrutinizes Dawkins’ methods, highlighting tactics which he deems are unreasonable and illogical - such as frequently resorting to straw-man arguments.

Dr Jonathan Sarfati, scientist, chessmaster, logician and Christian apologist knows well the creation vs evolution controversy. Before publishing The Greatest Hoax on Earth?, Dr. Sarfati authored the best-selling book, Refuting Evolution, which now has over 500,000 copies in print. His confident and rigorous approach always makes for interesting and thrilling reading, as he tackles his opponents head-on. Dr. Sarfati also tackles the ethical and biblical issues that accompany the creation vs. evolution issue.

The Greatest Hoax on Earth? Refuting Dawkins on Evolution provides a penetrating examination of Dr Dawkins’ anti-creationist magnum opus. Drawing on his extensive knowledge of biology, geology, fossils, radiometric dating, and more, Dr. Sarfati thoroughly exposes the bankruptcy of Dawkins’ arguments. Thousands of years ago, King Solomon wrote, "The first to plead his case seems right, until another comes and examines him." Sarfati maintains that arguments for evolution and against creation sound convincing only when they are unexamined.

Richard Dawkins is known for his strident atheism, for which he needs evolution. Dr. Sarfati is known for declaring that the biblical account of origins has abundant evidential support and has withstood the test of time. And unlike some writers, he is able to make the science mostly accessible to the lay reader, making it an informative and educational read that is nonetheless an intellectual feast for the scientifically trained. The Greatest Hoax on Earth? pulls together the most up-to-date arguments against evolution and in defense of the biblical account of origins. More details, including availability, at The Greatest Hoax on Earth?

Image downloads (22 meg zip file) at
http://creation.com/the-greatest-hoax-on-earth/Jono_Images.zip (Images of Dr Sarfati and the book are freely available for media use, Dawkins and Dawkins’ book sourced elsewhere)