A Facebook group has been created to provide the latest news, information and emergency telephone numbers in regard to the Israel fire disaster in the Carmel Mountains near the City of Haifa. We are requesting humanitarian aid - both ground and air fire equipment and smoke sensoring equipment to prevent natural disasters such as this in the future. 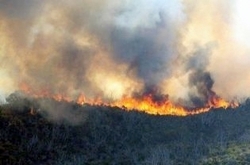 Fire sweeps across the Carmel Mountains in Israel

We have lost over 40 people to this fire. The candles that we normally burn for Hanukkah celebration have become memorial candles for our dead. We pray for their families and thank the many nations which have offered Israel humanitarian assistance.

A Facebook group has been created to provide the latest news, information and emergency telephone numbers in regard to the Israel fire disaster in the Carmel Mountains near the city of Haifa.

"We are witnessing a tragedy," said Joel Leyden, publisher of the Israel News Agency.

"This is the worst fire to have ever ravaged Israel. Over 40 people are now reported dead with many more injured. Israel Prime Minister Benjamin Netanyahu has declared the fire in the Carmel Mountains near Haifa as a national disaster."

Hundreds of thousands of people are now being evacuated from the Greater Haifa region.

The Facebook group will serve to show the world's support for Israel at this time, to provide the latest news, emergency telephone numbers and information for all to use to contribute either their skills or make a financial donations for ground and air fire equipment to protect Israel against future natural disasters.

Emergency numbers have been provided as follows:

Israel police said Friday that they have found a number of "suspicious articles," leading them to believe that terrorism using arson as a weapon may have been behind the deadly wildfire raging in northern Israel - the worst in the nation's history.

Police spokesman Micky Rosenfeld said "suspicious objects" found in one of the four centers where the blaze originated Thursday raised suspicions that the fire, which has killed 41 and injured 17, was started by arsonists. Rosenfeld did not describe the objects that were found.

Police in Israel have arrested two men from an Arab village on suspicion of arson in an area where a massive wildfire has been raging for 36 hours, Israel Radio reported Friday.

The men were seen throwing Molotov Cocktails in the forest near the northern city of Haifa, the report said.
Police suspect they may have also been responsible for new blazes which broke out north of the main fire on Friday.

District Police commander Shimon Koren reported several firebomb attacks in the Haifa district Friday night, Dec. 2, after police backed by an Air Force drone caught the two arsonists red-handed lobbing firebombs in several directions in a deserted area of Mt. Carmel. A police ambush backed by an Air Force drone trapped two men who, after looking around and seeing they were alone, lobbed firebombs in several directions. They have not been identified. The officers arrested them and took them in for questioning.

The fire has spread to three new sites - Kiryat Bialik, north of Haifa, Shefaram further inland to the east and Kiryat Tivon southeast of Haifa and the only one of the three locations actually on Mt. Carmel.

Earlier, near Kiryat Bialik, Israel police found an abandoned bike and a wig, apparently abandoned by another arsonist who had disguised himself with a wig and planned to ignite the local gas pump and start a fire that would have spread quickly to the factories of heavily-industrialized Haifa Bay.

Spotting the police, he dumped the wig and made off.

A third attempt to set dense foliage on fire was discovered in near Shefaram. Had it succeeded, a conflagration on the same scale as the Carmel disaster could have swept Western Galilee.

US President Barack Obama has expressed his "deepest condolences" for the victims of the Carmel fire in Israel and said the US had offered to help fight it.

The blaze killed 40 people, most of them prison guards on board a bus that was trapped in the inferno.

"I want to begin by offering our deepest condolences to the families, loved ones, of all of those who died," Obama told some 500 guests during a Hanukkah candle-lighting ceremony at the White House.

"As rescuers, firefighters are continuing their work, the United States is acting to help our Israel friends in this time of disaster," he said, adding that the government was looking into what kinds of aid it could provide.

The Israel fire service has urgently called up all 1,500 firefighters in the country, and Israel Prime Minister Benjamin Netanyahu made an urgent appeal for international assistance in containing the fire.

Humanitarian offers have poured in, with France and Greece pledging to send firefighting planes, Cyprus offering a helicopter and another firefighting aircraft, and Bulgaria reportedly sending 90 firefighters.

The Israel Ministry of Foreign Affairs said it had also received pledges of help from Romania, Azerbaijan, France, Russia, Croatia and Turkey.

Offers of assistance are pouring in and by Friday morning, five Greek aircraft had landed in Israel, alongside a plane and a police helicopter from Cyprus, a Bulgarian plane carrying 100 firefighters and a British chopper, an Israel military spokesman said.

A Boeing 747 loaded with the fire retardant chemical needed to stop the raging Carmel forest fires will leave the United States for Israel tonight, thanks to New York City Mayor Bloomberg, Israel Acting Consul General Ido Aharoni, members of the FDNY and Tom Harbour, the Director of Fire and Aviation Management for the US Forestry Service.

Bloomberg asked if New York could help Israel with its fires. Bloomberg mentioned in the call that FDNY Commissioner Sal Cassano had had a meeting scheduled for Friday with Israel's Deputy Minister of Defense, Matan Vilnai and two aides. Vilnai is in charge of Homeland Defense including natural disasters and terrorist/hostile military events against the civilian population. However, the Friday meeting had been cancelled due to Vilnai's return to Israel.

According to the Israel News Agency, Israel Prime Minister Benjamin Netanyahu spoke a short while ago today (Friday), 3.12.10, with Turkey Prime Minister Recep Tayyip Erdogan and thanked him for the assistance in the efforts to control the Carmel brushfire.

"We very much appreciate this mobilization and I am certain that it will be an opening toward improving relations between our two countries, Turkey and Israel." Prime Minister Netanyahu noted that his Turkish counterpart had expressed his willingness to help and Turkey's condolences, as well as his personal condolences, to the families of the casualties.

According to the Israel Prime Minister's Office, upon the outbreak of the blaze in the Carmel forests, all Israel Government ministries were mobilized to offer assistance to area residents and deal with the disaster.

The Israel Public Security Ministry instructed the Israel Police to coordinate efforts in the area of the fire. Fire and Rescue Service Commissioner Shimon Romach ordered that the entire Service be mobilized in order to fight the fire.

The Israel Health Ministry contacted area hospitals and raised their level of alert so as to prepare them to receive the injured, whom MDA is treating.

The Israel Interior Ministry has allocated a special budget to the local councils in the area in order to assist them in receiving evacuees.

The Israel Social Welfare and Social Services Ministry has opened a situation room in order to coordinate meeting the evacuees' needs. It is also mobilizing social workers from other districts in order to assist the local councils' welfare departments and in identifying the victims at the Institute for Legal Medicine at Abu Kabir.

The Israel Defense Ministry is engaged in purchasing fire extinguishing materials from abroad and bringing them to Israel.

The Israel Foreign Ministry is coordinating the arrival of forces and emergency equipment from abroad.

The Israel Housing and Construction Ministry has allocated resources in order to assist the evacuees.

The Israel Water Authority and Israel Electric Corp. personnel are working to quickly repair infrastructures in order to assist the firefighting efforts and restore residents' fabric of life.

And the Israel Finance Ministry has instructed the tax authorities to hasten the preparation of damage estimates.

Jewish and voluntary organizations around the world are cooperating with the Government in order to render assistance.

"Israel has endured a very severe drought and hot weather, leaving the precious trees and bush extremely dry," said Leyden, who maintains a digital PR, SEO and social media business in both Israel and New York.

"We cherish every drop of rain in Israel and respect every tree and plant."

Leyden states that Israel has entered into the Hanukkah holiday where children light candles of light to celebrate an ancient Jewish victory over the Maccabees. This Festival of Lights is an eight-day Jewish holiday commemorating the rededication of the Holy Temple (the Second Temple) in Jerusalem at the time of the Maccabean Revolt of the 2nd century BCE.

"We have lost over 40 people to this fire. The candles that we normally burn for Chanukah celebration have become memorial candles for our dead. We pray for their families and thank the many nations which have offered Israel humanitarian assistance."

Fire sweeps across the Carmel Mountains in Israel