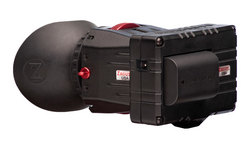 We have been working on the EVF design for the past five months and we are including features that shooters need...

Zacuto USA is leading the way with the Z-Finder EVF: a 3.2 inch, high resolution monitor that will work in conjunction with existing Z-Finder optical loops. “The resolution of the screen is incredible,” says DP & Director Philip Bloom, “which makes focusing an absolute doddle. Finally, a proper true viewfinder for these DSLR s.” Today, “We’re gonna change the game...again," says Steve Weiss and Jens Bogehegn, veteran filmmakers, product designers and owners of Zacuto. “We have been working on the EVF design for the past five months and we are including features that shooters need, such as, false color & peaking.”

“The wonderful part is we're half-way there considering we’ve had almost two-years to perfect the optics portion of our Z-Finder optical viewfinder, especially with our new anti-fog system, which has become the mainstay in the industry," says Weiss. Additionally, Zacuto has created a video series on “The Evolution of the Z-Finder EVF” coming to market. As of Oct 2010, they have released two videos in the series: “Introduction” and “Ergonomics.” In each video, Zacuto brings in outside specialists, DP’s and engineers to talk about these revolutionary concepts. "This is the first time," says Weiss, "we have created a continuing video series involving users, customers, industry leaders and engineers, which will document the evolution of our Z-Finder EVF from inception to delivery."

Pricing and Availability: Z-Finder EVF has a list price of $775.00. An upgrade path for existing Z-Finder users and a combo-kit (Z-Finder with EVF) will be available at a discounted price (TBD). For more information, to watch the Z-Finder EVF Video Series and to sign up for the Z-Finder EVF reservation list, visit http://zfinderevf.com.

ABOUT ZACUTO
Zacuto, located in Chicago, Illinois, is known for their "Made in the USA" brand of high quality, originally designed camera accessories. Their rental house division builds custom camera packages and delivers nationwide. Zacuto Films produces original programming and most recently, two of their webisodic programs: “FilmFellas” and “The Great Camera Shootout 2010” are nominated in the 2010 Emmy Awards. For more information, visit http://www.Zacuto.com.