EKTIMIS unveils a commissioned artwork that commemorates the 10th Year Anniversary of the events of September 11. The innovative collectible framed print, rich in symbolism, features the current New York skyline, while the reflection in the Hudson River portrays the World Trade Center still standing. The print is part of a September 11 initiative designed to unite Americans while honoring firefighters and America’s men and women in uniform. 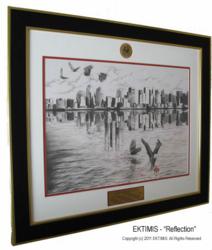 EKTIMIS has planned this 9-11 initiative to unite and inspire the country by focusing on what brought us together during a time of tragedy. The World Trade Center attacks should not be forgotten; we want to honor America's brave men and women in uniform.

EKTIMIS announces a 9-11 initiative and unveils an innovative, collectible artwork, titled “Reflection,” that commemorates the 10th Year Anniversary of the events of September 11, 2001. The framed print, commissioned by EKTIMIS, uses powerful symbolism to capture and document the aftermath of the World Trade Center attacks. The print honors the memory of those who were lost, firefighters who serve their country, as well as the brave men and women in uniform.

As 2011 marks the start of a highly contested 2012 presidential campaign across the United States, the significance of the 10th year anniversary of September 11, an event that reshaped the course of history, may become secondary or perhaps lost. A spokesperson for EKTIMIS says, “EKTIMIS has planned this 9-11 initiative to unite and inspire the country by focusing on what brought us together during a time of tragedy. The World Trade Center attacks should not be forgotten; we want to honor America’s brave men and women in uniform.”

The EKTIMIS 9-11 Initiative is the creation of Niyi Taiwo, founder of EKTIMIS and author of the EKTIMIS Top Ten Laws of Respect literary principles and the Top Ten Laws of Respect book series. The initiative will officially commence this summer when EKTIMIS launches its new 9-11 Initiative (anniversary) website. Ahead of the summer commencement, EKTIMIS recently initiated a 9-11 Pre-Launch Event providing advance access to the commemorative artwork specifically for U.S. military personnel, federal employees, law enforcement and defense contractor organizations – primarily the people on the front lines of protecting and defending the country from another terrorist attack.

About EKTIMIS:
EKTIMIS is an innovative human capital development solutions provider. EKTIMIS develops its own brand of original products and services that include respect-themed books, articles, multimedia videos, workplace and organizational culture training seminars (featuring the hallmark EKTIMIS Respect in the Workplace Program), and powerful inspirational picture-framed artifacts for individuals, working professionals, parents and families, and organizations. EKTIMIS also offers a Custom Artifact Program that provides an innovative platform for fund raising and for commemorative events by private and public organizations. EKTIMIS and EKTIMIS.com are a licensed brand and an operating business division (DBA) of Strategic Enterprise Technology, Inc., a creative Boston-based performance improvement solutions company founded in 1999. Follow EKTIMIS news and activities on Twitter/ektimis and on Facebook. Also, visit the EKTIMIS Online Store for more information on current and coming offerings, and to view the “Reflection” print honoring those lost in the September 11 World Trade Center attacks.