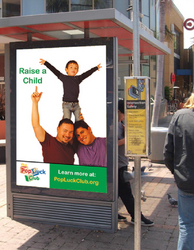 We make lunches for our kids, get them to music and karate lessons… just like every family.

The Pop Luck Club, a non-profit organization that supports gay fathers throughout Southern California, announced today the launch of its “Raise a Child” ad campaign that is geared to raise community awareness, support and understanding for gay fathers and their families.

The campaign also aims to inspire and aid gay fathers and prospective fathers as they explore the many routes to creating families, including surrogacy, fostering and adoption. The campaign includes radio PSAs and bus shelter ads featuring family portraits of its members. The ads run throughout January across the Los Angeles region, from the San Fernando and San Gabriel Valleys through the West Side, Central and East L.A. to Long Beach and Orange County.

The ad campaign hopes to reduce stigma around gay parenting. “We make lunches for our kids, get them to music and karate lessons… just like every family,” says Richard Valenza, co-president of the Pop Luck Club. He adds, “With this campaign, we are putting a real face on gay parenting.”

Since its founding in 1998, the Pop Luck Club has grown from a handful of fathers to over 500 members. It facilitates monthly “pot luck” play dates, discussions and support groups, online resources and news groups, family events and mentorship programs for prospective fathers.

Some gay fathers have found a perfect match through fostering and public adoption. “Nationwide, over 200,000 children are awaiting families,” said Dr. Tony Zimbardi, a Pop Luck Club board member. “It is our hope that more gay men will be inspired and enabled to create the loving families they deserve.”

The group’s members overwhelmingly report that raising children has affected them deeply. “Growing up, many of us felt sadness that coming out as gay would end our dreams of parenting,” says John Ireland, a Pop Luck Club board member. “I now know that becoming a father and providing a loving home for our child is the most important and rewarding thing I have ever done.”

InTransitShelter_print.pdfImage of Ad in Transit Shelter from the Pop Luck Club "Raise a Child" media campaign