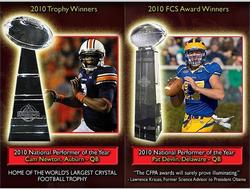 After an extensive review of the existing data, literature, and evidence, College Football Performance Awards proudly announces the 2010 CFPA Recipients. The 2010 list includes a total of 52 D-I FBS & FCS winners.

About the College Football Performance Awards:
The purpose of the College Football Performance Awards is to provide the most scientifically rigorous conferments in college football. Recipients are selected exclusively based upon objective scientific rankings of the extent to which individual players increase the overall effectiveness of their teams.

As prominent scholars from a wide variety of disciplines note, CFPA eliminates the politics and biases that vitiate balloting-based awards. Furthermore, CFPA is the only awards organization to receive praise from both Republican and Democratic White House officials for promoting objectivity and fairness in college football.

“CFPA is for fans and players demanding equity in the awards process,” states National Security Agency science consultant Amy Langville. “CFPA has a clear methodology that works against bias,” writes North American Society for the Sociology of Sport President C. Richard King. “CFPA may transform the individual trophy quest from a public relations battle to the legitimate question of which athletes did the most for their teams-BCS or not,” adds sports ethicist Gordon Marino.