Egypt smoulders as the country's president grows more unpopular by the minute. A book his regime banned in 2008, "Inside Egypt: The Land of the Pharaohs on the Brink of the Revolution," offers unparalleled insight into the unfolding drama. 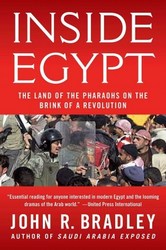 INSIDE EGYPT: THE LAND OF THE PHARAOHS ON THE BRINK OF A REVOLUTION (Palgrave Macmillan, 2008) by John R. Bradley

John R. Bradley is a writer looking for the truth in Arab countries ruled by dictators. His writing is brave and essential to our understanding of the reality behind the official, artificial image of our societies. — ALAA AL-ASWANY

As Egypt smoulders and the country's president grows more unpopular by the minute, a book his regime banned in 2008, "Inside Egypt: The Land of the Pharaohs on the Brink of the Revolution," offers unparalleled insight into the unfolding drama in the Arab world's most populous country.

The controversial book by John R. Bradley, a British expert on the Middle East, caused an international media firestorm when it was banned by the Mubarak regime on publication. Now it is easy to see why it so threatened the regime, having predicted with remarkable accuracy the revolutionary fervor now sweeping the Arab world’s most populous country.

"Inside Egypt" (New York: Palgrave Macmillan, 2008) boldly argued that a revolutionary uprising would happen this year by pinpointing a perfect storm that strikingly resembles what is happening in Egypt today. Bradley, who is fluent in Egyptian Arabic and lived in Egypt during most of the last decade, uniquely among Western observers of the country made such a categorical prediction of imminent revolution.

Bradley argued that a revolution would be sparked by a random event that no one could foresee, but would not come from the traditional Egyptian opposition political parties. That event turned out to be the Jasmine Revolution in Tunisia. He also argued that the timing of the uprising would coincide with the final perceived push to transfer power from President Hosni Mubarak to his widely despised son, Gamal. The uprising is taking place just months before key presidential elections, which were believed by most Egyptians to be the final maneuver to introduce hereditary succession. Finally, Bradley pointedly stressed that the Muslim Brotherhood, Egypt’s largest and most disciplined opposition group, would never instigate such a revolution, but would ride the wave of popular anger once it got underway. That turned out to be precisely the Brotherhood’s strategy during the current uprising.

“It was the Egyptian and pan-Arab media that made 'Inside Egypt' a bestseller,” says Bradley. For two weeks, he recalls, "Inside Egypt" received blanket media coverage in Egypt, and on one day the book's cover was reprinted on the front page of every Egyptian independent and opposition newspaper. Amid a growing outcry at its act of blatant censorship, the Associated Press reported that the Egyptian regime had reneged and decided to lift the ban.

“Egyptians set up Facebook sites, in English and Arabic, which collectively attracted more than 10,000 followers, and they translated key passages into Arabic. Egyptians sometimes mentioned the book when they called in to popular current affairs programs on local television channels. The BBC Arabic satellite station led its main news broadcast with a report on the Mubarak regime’s decision to ban the book. Obviously, it struck a chord with Egypt’s intellectual and political elite, who, like me, saw the writing on the wall.”

For more information on the book and author, visit: johnrbradley.wordpress.com