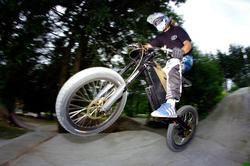 The electric bike on steroids.

The Fighter by Stealth Electric Bikes has a top speed of up to 31mph, offering distances of up to 37 miles on one charge. The Fighter standard suspension set up includes over 180mm front suspension and 200mm rear standard. The Fighter uses the same quiet technology as the Bomber, the Fighter comes in at a weight of only 90lbs.

Both bikes feature rechargeable LiFePO4 batteries that can easily be switched out in under 90 seconds. Stealth offers a series of upgrades in brakes and suspension currently, with engine upgrades to follow.

The Bomber and The Fighter also come with a Lifetime warranty on the frame and swing arm and 12 month warranty on the rest or the components. This warranty is typical on all Stealth Products.

“We are very excited to be able to bring these high performance engineered electric bikes to the U.S. Market,” said Michael Brown, Sales Manager for Stealth Electric Bikes USA. Brown said, “These electric bikes are the highest powered, longest range bikes that you can find today. They are almost as quiet as pedaling alone, and are extremely fun and exciting for sports and bicycle enthusiast all across the United States.” “That is why they are often referred to as the electric bike on steroids,” said Brown. “They define a new area of sporting not yet seen in the US, we look forward to all the possibilities down hill mountain bike riders and freestyle riders bring to the table.”

Stealth Electric Bikes USA is based in Phoenix, AZ and can be found online at http://stealthelectricbikesusa.com.