The Federal Emergency Management Agency recently released a Solicitation for Suppliers to provide Emergency Preparedness Supplies including Survival Kits & Freeze Dried Food in the event of a devastating earthquake in the United States. Thinking California? Think again. How about the New Madrid Seismic zone right in the middle of America's Heartland, the site of this country's worst ever recorded shake and strangly close to the recent earthquake swarm in northern Arkansas. Is FEMA being cautious, or do they know something we don't? 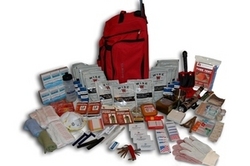 Build Your Survival Kit at SurvivalOutpost.com

FEMA is smart enough to know that the request alone will spur fears in the region, especially in our internet-based culture, but they obviously felt the risk was acceptable. That speaks volumes.

Since mid-January SurvivalOutpost.com has experienced a dramatic increase in product sales to customers in the Midwest. The reason for this increase in sales would seem intuitive -- Midwestern states have been getting routinely hammered by the epic winter snows of 2011. However, after interviewing a handful of customers from the Midwest, SurvivalOutpost.com made a new and rather sobering discovery -- many of these customers are becoming increasingly worried about the New Madrid Fault, an increase in Arkansas earthquakes, and the strange (and poorly explained) deaths of thousands of birds and fish in the region, and they are planning for the worst.

"We are told not to be worried, that the birds died because of firecrackers, the fish from the cold, and that the earthquakes are normal, but this just doesn't feel right. We're stocking up on Emergency Preparedness Supplies because we are worried," said Alita G., a resident of Arkansas and SurvivalOutpost.com customer.

And there is plenty to be worried about. According to a recently released USGS press release, north central Arkansas has experienced more than 60 earthquakes since February 15, with magnitudes reaching a whopping 4.3. The swarm of earthquakes has scientists scratching their heads, and speculation runs the gamut from hydraulic 'fracking' to the re-awakening of the New Madrid Fault.

"It would be easier to believe the authorities' claim that there is no need to worry if FEMA had not recently released a Request For Information from vendors to provide Freeze Dried Food and other supplies for a 'Surviving Population of Seven Million Due to a New Madrid Event'," notes SurvivalOutpost.com co-owner Kevin Baum. "As a former fire chief from Austin, Texas, and a former FEMA first responder, I can tell you that this Request For Information suggests a very real concern. FEMA is smart enough to know that the request alone will spur fears in the region, especially in our internet-based culture, but they obviously felt the risk was acceptable. That speaks volumes to me," cautions Baum.

Whether there is anything to the strange synchronicity of these events remains to be seen, but people in the Midwest should be prepared regardless. "Both FEMA and the USGS are encouraging people in the region to remain alert and to build all hazards Survival Kits just in case, and SurvivalOutpost certainly agrees with this advice."

"Remember that when the time for action is upon you, the time for preparation is gone. People in the region should view these sobering events as a loud and clear call to action," warns Baum.