Honoring years of service to the profession, Reherg receives highest honor to be given to an athletic trainer in the state of New Jersey by its professional society. 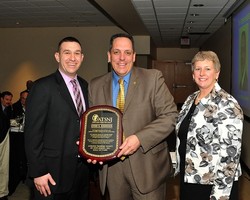 “For Robb to receive this recognition while he’s still active in his career is pretty remarkable. It shows what he has done and what it means to this profession in New Jersey,”

Rehberg was inducted during an awards banquet on Sunday, February 27th which was held in conjunction with the ATSNJ’s 25th Annual Athletic Training Conference at the Wyndham Princeton Forrestal Hotel and Conference Center in Plainsboro, NJ. He joins 15 other dedicated athletic training professionals so honored by the ATSNJ since 1997.

“Robb has dedicated himself to the profession of athletic training and served our membership well,” said ATSNJ President Eric Nusbaum, ATC. “He has been committed to improving athlete safety on various fronts from concussion management and education to overall health care issues.

Induction into the Hall of Fame recognizes contributions on the state, regional and national levels, as well as professional excellence, with the largest portion of the criteria pertaining to athletic training activities within New Jersey. Hall of Fame inductees are nominated and selected by their athletic training peers and have been actively working for at least 15 years as a Licensed Athletic Trainer in New Jersey.

Nusbaum noted that Hall of Fame recognition often honors a lifetime of service, and that for Robb to receive it while still in the middle of his career speaks volumes about the significance of his contributions to athletic training in New Jersey.

“For Robb to receive this recognition while he’s still active in his career is pretty remarkable. It shows what he has done and what it means to this profession in New Jersey,” said Nusbaum.

Dr. Rehberg has played a major role in the ATSNJ and thus, has advanced the health care received by athletes throughout the state. As the president of the Athletic Trainers’ Society of New Jersey from 2007-2009, he was an integral part of revision of the athletic training licensure act in 2008. Additional service to the ATSNJ included serving as the governmental relations coordinator, the executive council, the public relations committee, the technology committee and as anorthern regional representative. In recognition of this activity, Rehberg received the ATSNJ’s Distinguished Service Award in 2009.

In addition to his work at William Paterson University, Rehberg serves as an athleic trainer at Overlook Hospital and is a partner with the Konin Rehberg Group. Dr. Rehberg earned his bachelor’s degree in Athletic Training, West Chester University of Pennsylvania. In 1999, Dr. Rehberg earned a Master of Sport Science degree from the United States Sports Academy in Daphne, Alabama. In 2003, Dr. Rehberg earned a Doctor of Philosophy degree in Health Science from Touro University International in Cypress, California.

ABOUT THE ATHLETIC TRAINERS’ SOCIETY OF NEW JERSEY
ATSNJ, Inc. consists of licensed athletic trainers, physicians and other allied health care professionals whose goal is to promote quality healthcare for athletes in any setting. For more information, visit the ATSNJ on the web at http://www.atsnj.org.