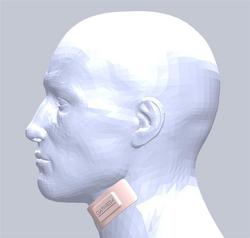 Clarimedix Inc., will present results of recently completed animal studies on its groundbreaking, non-invasive treatment of Alzheimer's disease at the International Conference of the AD/PD (Alzheimer's Disease/Parkinson's Disease) Conference in Barcelona on March 9.

"We will describe how our technology is paving the way for what we believe will make Alzheimer's a controllable and treatable disease," says John Dunning, CEO and president of Clarimedix. "This has the potential to revolutionize Alzheimer's treatment options for patients and families."

The Clarimedix technology is a light-based medical device in the form of a flexible patch that is applied to the skin over the carotid artery. Using a proprietary wavelength and duration of light developed by Clarimedix, the device emits light through the skin and tissue down to the carotid artery. It then triggers targeted, localized and controllable production of nitric oxide, a well-known vasodilator and neurotransmitter capable of increasing blood flow, reducing inflammation and triggering gene expression changes in the brain.

Technology that does not target beta amyloid
The technology is unique in that it does not target beta amyloid. Over the last three decades, most Alzheimer's research has been governed by the "amyloid cascade hypothesis," according to Lauren Costantini, Ph.D., vice president of medical and clinical affairs for Clarimedix. The theory has had significant appeal, she explains, as the amyloid peptide is the main ingredient of the disease-related plaques that are common in the brains of those affected with Alzheimer's disease. "This correlation has led researchers to spend many years - and hundreds of millions of dollars - looking for ways to prevent or clear plaques as a way of treating Alzheimer's," says Costantini. "In recent years, however, many of the human clinical trials, based on this theory, have failed."

At the same time, a growing body of research has indicated that Alzheimer's disease is the result of deficient blood supply to the brain over time. Scientists and clinicians have long known that cardiovascular conditions predisposing patients to heart attack and stroke also significantly increase the likelihood of developing Alzheimer's disease, explains Dunning. Investigators are recognizing that it is the reduced cerebral blood flow that may be the first step in the pathologic evolution leading to the disease.

Non-invasive, non-drug treatment
According to Dunning, the Clarimedix approach is groundbreaking not only because it may effectively treat Alzheimer's disease symptoms, but also because it represents paradigm-shift advantages over traditional drug approaches.

Briefings at the 10th International Conference of the AD/PD Conference
The AD/PD Conference is a biennial international meeting of professionals and investigators in the fields of Alzheimer's Disease (AD), Parkinson's Disease (PD), combining distinct neurodegenerative diseases in one setting to examine their integration. The conference setting provides delegates with a diverse, multi-disciplinary scientific program covering the most recent research, developments and treatments.

The data that Clarimedix has generated from its pre-clinical program show that the company's technology targets a different pathway involved in Alzheimer's disease, and that the device is safe and well tolerated. To schedule a briefing with Lauren C. Costantini, vice president of medical and clinical affairs for Clarimedix, contact Aimee Bennett at 303-843-9840 or aimee(at)faganbusinesscommunications(dot)com.