Middle Georgia Raceway, nestled among the peach orchards in Byron, Ga., is landmark well known by those familiar with Georgia racing history. It has quietly remained only a memory to many since closing decades ago. One of those with fond memories is three-time MGR Grand National winner, Bobby Allison. 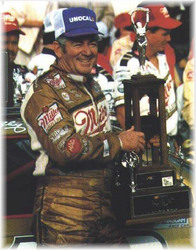 We heard rumors there was something like that going on, but we were so busy trying to race we really did not know what had happened until well after the race.

The sounds of race cars, the smell of racetrack food, and hoards of passionate fans will return to this hallowed ground this Friday and Saturday, March 11th and 12th for the first annual Jeff Smith Chevrolet Middle Georgia RacersReunion®. This event is expected to bring race drivers, car owners, mechanics, and fans from all over Georgia and surrounding states to celebrate the rich racing history created at Middle Georgia Raceway (MGR) and other round tracks and drag strips throughout the region. There will be a classic car show, vintage stock car and drag car display, vendors, and an autograph session with some of the greatest names in Georgia racing history including Bobby Allison.

MGR is known for more than just its racing history. According to the Macon Telegraph, on November 12, 1967, Federal Agents raided an elaborate moonshine still that had “allegedly” been operating under the third turn of the racetrack. Bobby Allison won the NASCAR Grand National event that day and had this to say about the raid. “We heard rumors there was something like that going on, but we were so busy trying to race we really did not know what had happened until well after the race.” Apparently the track owner was arrested and later released…since no moonshine was actually found. MGR went on to make even more history as the site of the 1970 Atlanta Pop Festival where some crowd estimates exceed 500,000 spectators. Those who attended saw greats such as Jimi Hendrix, Procol Harum, Poco, BB King, The Allman Brothers and more.

“We are excited to reunite drivers, fans, and others at MGR,” said Jeff Gilder, creator of RacersReunion.com and event coordinator. “This race track and surrounding property was purchased for commercial development. We are hoping that a good response to the event might make property owners consider saving the track.” The same occurred after one of Gilder’s RacersReunion® events at Historic Columbia Speedway in Cayce, SC.

The Jeff Smith Chevrolet Middle Georgia RacersReunion® comes to life when gates open Friday at 4 PM for the Georgia Bob’s Barbeque Feast and Wine tasting followed by a candle light track walk and concert. The event runs Saturday from 9 AM to 9 PM. A five dollar ticket gains entry for bother days. For more information see the events calendar on the Stock Car RacersReunion portion of RacersReunion.com.