After a brief hiatus Mary Anne De Larwelle, who has perfected the art of recreating the rich vibrant and detailed look of real stained glass using cost effective window films, is back on the web as Decorative Films by Mary Anne. Her most recent addition is a stained glass pattern gallery dedicated to the hardworking firemen who risk their lives daily. 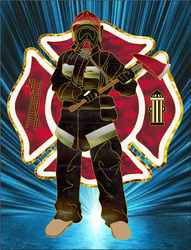 About the idea of decorative window films Mary Anne has said, “Small privacy window clings have been around for a while but like a lot of things, window films have entered a new era. It's a fairly new idea that has a lot of exciting possibilities.

After a brief email exchange with the boyfriend of a recent client Mary Anne was inspired to add a new pattern gallery to her already vast selection of stained glass designs (http://www.decorative-films-by-maryanne.com/). Dave a volunteer fireman was looking on the web for a firemen decal to put in his office window and after having no success contacted Mary Anne to see if she could help. With this little bit of inspiration Mary Anne created a dedicated gallery featuring stained glass window films for fireman and is offering free editing for creating more design patterns.

Dave is quoted as saying about the new gallery "Holy Cow. That is unbelievable!!!! What is the cost? I want one! That looks totally awesome"

Mary Anne first started in the decorative window film business back in 2002 with another company. Since then she has branched out on her own and opened Decorative Window Films (http://www.decorative-films-by-maryanne.com/) with continued enthusiasm for creating beautiful artwork. Decorative Window Films is an online store that is guaranteed by Mary Anne to surpass any and all expectations. There are literally step-by-step instructions on the entire process, from picking out which window film works best, to how to attach the film to the window. The general public most likely perceives window clings as the cheap holiday decorations that get put on a window or mirror and only last a year or two. While it has the same concept, decorative window films are completely different.

About the idea of decorative window films Mary Anne has said, “Small privacy window clings (http://www.decorative-films-by-maryanne.com/WHYUSE.html) have been around for a while but like a lot of things, window films have entered a new era. It's a fairly new idea that has a lot of exciting possibilities. The limitless growth potential is there, we just have to see where it takes us.”

Decorative Window Films by Mary Anne offers the ability to re-create any image. If a customer sends in a picture or emails a digital photo, Mary Anne can custom make an exact replica. The possibilities are endless for creative designs. Nowadays with windows varying in all shapes and sizes, the standard width and height of typical window films are becoming obsolete. Mary Anne can custom size the decorative films for any particular window, no matter how odd the dimensions. The better the fit; the easier it will be to hang the window films. With a little help from Mary Anne and a person’s own DIY skills, plain windows will be transformed into a beautiful work of art. Custom stained glass window clings (http://www.decorative-films-by-maryanne.com/cat/TRAD.html) are designed to look like the real deal.

Mary Anne has eleven types of windows films to offer for beauty and privacy all expertly printed to your size, shape and colors. All of the films vary in longevity, indoor/outdoor use, amount of UV protection, amount of privacy, eco-friendly adhesive or even non-adhesive; each film is made with certain characteristics to match individual needs and wants. Tastes change just like people change, and with that in mind decorative window films can change too. Although each of the window film materials are made differently, all of them are able to be easily removed without leaving sticky residue.

To see all the designs and past projects completed by Mary Anne visit http://www.decorative-films-by-maryanne.com

Serve and ProtectA golden fireman's helmet with two crossed axes is set against a black Maltese cross on a red and yellow fire background.

Fireman's PrayerA silhouette of a fireman stands proud against a blazing fire background in this decorative window film pattern. The fireman's prayer is there for all to read.