With the IRS’s focus on US expat taxes on the rise, Greenback Expat Tax Services recommends that Americans living abroad take advantage of a second (and maybe last) opportunity to become compliant 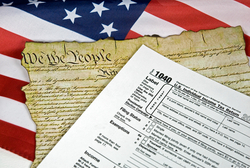 US expat taxes due June 15th

Greenback Expat Tax Services, New York: The US Government and specifically the IRS is continuing its focus on what is estimated at billions of dollars in unreported and untaxed monies being held offshore by US citizens. New measures being considered by the IRS include:

“While neither of these options for enforcement are currently being used by the IRS, they show that the government is only looking to become more and more aggressive in their tactics to make US expats compliant with their tax obligations. We recommend that Americans living abroad ensure that they take three key actions to get compliant with their US expat taxes: file in time for the June 15th deadline, report their foreign bank accounts by June 30th, and, if already delinquent, take advantage of the current Voluntary Disclosure Program which expires on August 31st to get back on track” says David McKeegan of Greenback Expat Tax Services .

Although it is not a new requirement for Americans living abroad to file their US expat taxes and report their foreign bank accounts, the past couple of years have seen the government instituting and researching even more stringent measures to ensure compliance. Two new reports suggest that measures are only becoming more aggressive.

One such measure may be a restriction on US passports for delinquent taxpayers. Congress requested a study by the Government Accountability Office (GAO) to look into whether withholding US passports from individuals with outstanding tax balances would increase IRS tax collections. The study, released by the GAO in March 2011, suggests billions in unpaid tax revenue could be claimed by the IRS if individuals owing taxes were denied US passports.

The study states that “As federal deficits continue to mount, the federal government has a vital interest in efficiently and effectively collecting the billions of dollars of taxes owed under current law. Federal law already allows the linkage of debt collection with the passport issuance process in certain areas, including for certain outstanding State Department debt and child support enforcement.”

The study looks at Fiscal 2008 and shows that taxes of at least $5.8 billion dollars were owed by people who were issued US passports. This includes a gambler who owed $46.6 million dollars and a property owner who owes $39.9 million. The GAO concludes that legislation denying US passports to individuals with outstanding tax liabilities “…could have the potential to help generate substantial collections of known unpaid federal taxes and increase tax compliance for tens of millions of Americans holding passports.”

Many Expats will also be familiar with the Foreign Bank and Financial Account Form, more commonly known as the FBAR, which requires all foreign bank accounts to be reported to the Treasury by June 30th, if the cumulative balance is over $10,000 at any point during the year. Foreign banks are currently required to submit account details of US citizens with over $10,000 in their accounts to the IRS or face substantial withholding penalties on their US assets. This has caused a number of foreign financial institutions and Swiss banks to close out the accounts of US citizens.

The Justice Department is now considering whether it could apply the FBAR penalties to Banks and Financial Institutions if these institutions have violated American tax law. Top penalty for not filing the FBAR is 50% of the account balance for each year the account is in violation and this could put the financial assets of these institutions at risk. In 2009, UBS, the Swiss banking giant, paid $780 million in fines for selling illegal offshore vehicles to wealthy Americans. No FBAR penalties were included in this settlement, but the FBAR penalties could dwarf the $780 million UBS has already paid.

“This will no doubt make it even more difficult for Americans living abroad to open and maintain legitimate banking relationships where they live and work” Said David McKeegan. He went on to say that, “It is now not uncommon for US citizens to be denied bank accounts because foreign banks either do not want to or are unable to comply with US government reporting requirements.”

Also, in March, Federal prosecutors filed papers stating that a former Credit Suisse private banker – Christos Bagios – “could be forced to pay a FBAR penalty for as much as $19 million for just one tax year,” This is based on the theory that he aided and abetted US clients who failed to disclose their foreign accounts to the US government and as a result could now face FBAR penalties himself.

David McKeegan concludes, “The unfortunate fact is that a lot of the US expats that the government has in their targets may honestly believe that they are compliant with their taxes and are simply unaware of their obligations. You’d be surprised how many people don’t know they have to file taxes in the US even if they file in their country of residence, or believe they don’t have to report foreign bank accounts because they aren’t considering assets such as ISA’s. We always encourage checking with a tax professional regarding your particular situation to make sure you are fully compliant.”