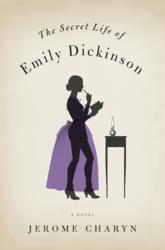 “The Secret Life of Emily Dickinson” has Emily narrating her own life. And what a “secret life” it truly was, according to author Jerome Charyn.

How could someone who barely left her bedroom for decades, communicating with others only by notes or from behind a partially-opened door, write so convincingly and sensuously about the world?

History is not always kind to our dead geniuses, and of course they can no longer speak for themselves. Or can they?

Best-selling author Jerome Charyn, a passionate admirer of Emily Dickinson, the iconic, Mona Lisa-like enigma widely acknowledged as America’s greatest female poet, has researched, absorbed—some might even say “channeled”— the great American poet’s voice through her poems, letters and notes. In his valentine of a novel, coming out in paperback this Valentine’s Day, Feb. 14, 2011 (W.W. Norton & Co.) he has used her idiosyncratic style of speech, and her re-imagined, re-configured, possibly even really accurate life story to give her what many critics and Emily Dickinson enthusiasts alike believe is an astonishing voice from beyond.

For Charyn, Emily Dickinson’s body of work, her personal papers, and other factors led him to a contrarian conclusion about the “real” Emily Dickinson. What emerges is a very different portrait, when contrasted with the bloodless, sexless, prim, virginal recluse she is generally viewed as having been. To this end, Charyn has written what critics hail as a “remarkable,” “startling” and “original” novel that, they agree, offers a dynamic psychological portrait of this beloved poet while also a compelling and enjoyable read.

“The Secret Life of Emily Dickinson” has Emily narrating her own life. And what a “secret life” it truly was, according to Charyn. Behind the closed door the reader meets a wildly passionate personality, and many mysteries explained—again, by Emily herself—as to why she chose to separate herself from society, live as a virtual recluse, and become the enigmatic “Nun of Amherst.”

One respected critic, Mark Traphagen, wrote: “How could someone who barely left her bedroom for decades, communicating with others only by notes or from behind a partially-opened door, write so convincingly and sensuously about the world? Charyn’s answer is to hypothesize that shy Emily may have been more the adventurous than we have known. This is a work of brilliance. The author succeeds in creating a voice for Emily that rings true.”

Anyone already in love with Emily Dickinson’s remarkable poetry will want to read this book. Those less familiar with her work will be extremely intrigued and want to learn more about her wonderful poetry and her strange and remarkable life.

For more information on this unusual book, a very special and romantic gift idea for the literary Valentines in your life, and especially for Emily Dickinson lovers, visit http://www.jeromecharyn.com. The paperback can be preordered now through any online bookstore.