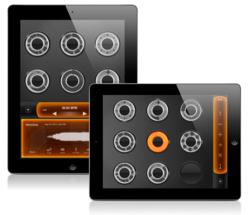 The app fully exploits the iPad’s large display with up to 12 tracks for rich, detailed compositions

Software artisan company, A Tasty Pixel today announces the launch of Loopy HD, the iPad and universal version of its acclaimed live looping app. Loopy HD lets anyone create music by layering looped recordings of singing, beatboxing, or playing an instrument in a sleek, tactile interface that combines power with simplicity. The app fully exploits the iPad’s large display with up to 12 tracks for rich, detailed compositions. A wealth of expressive features lets more advanced users take their creativity even further.

The original iPhone-only version of Loopy, launched in June, has received acclaim from music industry commentators and musicians alike, and has been recently featured by Apple on the App Store.

“This is the best loop station on the iPhone,” said professional beatboxer and recording artist Dub Fx. Pro audio blog “iOS Recording” recently wrote “Loopy 2 is by far the best looper for the iPhone we’ve seen to date.”

Loopy HD runs on the iPod Touch, but it is not specifically designed for these devices. iPod Touch users must use Loopy HD with a headset, as the iPod Touch does not have an inbuilt microphone.

Pricing and Availability: Loopy HD is available at the special 50% off launch price of $3.99 (USD) exclusively through the App Store in the Music category.

About A Tasty Pixel

A Tasty Pixel specializes in iPhone and Mac apps with beautiful and functional user interfaces – software that works like an extension of oneself, with the charm and elegance that make it a pleasure to use. A Tasty Pixel currently has two iPhone apps available on the App Store -- The Cartographer and Loopy. A Tasty Pixel products have been extensively featured by Apple and have been finalists on several occasions for the prominent iPhone industry competition, Best App Ever Awards, hosted by 148 Apps.
A Tasty Pixel can be found on Facebook and Twitter.