Andrew Hawley announces his search for original Bob Dylan and Joan Baez Concert Posters from the New Haven Arena. This Henri de Toulouse-Lautrec inspired poster was designed by Eric Von Schmidt. It is reported that Bob Dylan did not like this poster so it was discontinued. This beautiful art nouveau Dylan and Baez concert poster is highly sought after. 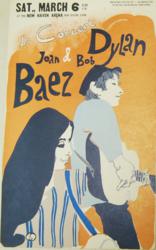 Artist Eric von Schmidt tried to present the artists so they would not outshine each other. The poster was discontinued because of Bob Dylan’s displeasure with it.

Andrew Hawley, of Vintage Rock Posters, announces his plans to search for original Bob Dylan and Joan Baez concert poster. This concert was held on March 6, 1965 at the New Haven Arena. Hawley states, "The legendary folk artist Eric von Schmidt designed this poster. His Toulouse Lautrec design showed Baez first and Dylan higher on the poster layout. The artist was trying to present the artists so they would not outshine each other. The poster was discontinued because of Bob Dylan’s displeasure with it." Hawley adds, “He has seen a few of the concert handbills with different dates on them from the 1965 Dylan/Baez tour. About 10 years ago, he ran into a fellow who attended Yale University in 1965. He went the show and still has his ticket stub. He and some of his buddies were asked to hang the posters at local record stores, barber shops and other store fronts in New Haven.” Hawley continues, “The student noticed that many of the posters that he and his friends had hung up were disappearing. He concluded that the poster was popular amongst music poster and music enthusiasts alike. This poster is still popular. It is featured on the front cover of “Positively 4th Street” by book recently published by David Haju.“ Hawley believes that there might be a few of the Dylan and Baez concert posters stashed away in a few Connecticut attics and hopes his $5,000 cash bounty will drag a copy out of the woodwork.

Hawley will pay $5,000 for original vintage Bob Dylan and Joan Baez concert poster from the New Haven Arena. Any condition is accepted. Sellers will be paid in cash within 24 hours guaranteed. For more information, go to http://www.vintageconcertposterbuyer.com.