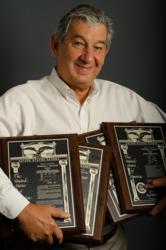 The ability to generate dynamic per-packet keys sets the TrustChip apart as one of the most reliable solutions on the market to protect against cell phone hacking – and now that technology is patented.

KoolSpan, Inc., developer of the TrustChip® family of plug-in mobile security solutions, today announced that founder and Chief Scientist Tony Fascenda has been awarded four new patents by the U.S. Patent Office on behalf of the company.

Chief among them is patent 7,913,085, for a system and method of Per-Packet Keying central to KoolSpan’s TrustChip solution. Secure voice calls are encrypted at the rate of 50 times a second, but traditionally use the same key for each encryption. The newly patented technology allows for a new key to be generated for each packet of data, making it virtually impossible to use standard hacking methods for interception. Fascenda said the applications of this technology for the corporate world, particularly the financial sector, are wide-ranging.

“The ability to generate dynamic per-packet keys sets the TrustChip apart as one of the most reliable solutions on the market to protect against cell phone hacking – and now that technology is patented,” he explained. “By delivering the solution on a tiny SD card, we have created a strong security connection in an easy, elegant way. The easiest thing to do is create something complicated. We’ve made a very complicated system simple to use.”

The additional patents include one for a subnet box, a small network appliance that provides for an authenticated end-point for mobile clients to connect to the enterprise LAN from a remote location; another for enabling secure multicast and broadcast transmissions; and another for allowing users to automatically connect to different networks, each with an individualized and distinct authentication credential.

KoolSpan now holds 12 patents, and Fascenda has personally been issued 22, an achievement the technology entrepreneur views as a credit to a career defined by innovation and persistence.

“Writing patents is not for the faint of heart,” said Fascenda. “A lot of technology companies don’t have their own technology to patent or don’t bother to go through the process. I am proud of our new patents and even more proud of the encryption technology that we’re bringing to the market.”

Added KoolSpan CEO Gregg Smith, “Patents separate the technology companies that have proprietary technology from those that don’t. The four new patents issued to KoolSpan are proof positive that our company goes to great lengths to make it nearly impossible to intercept communications when using our TrustChip technology.”

About KoolSpan, The TrustChip Company
KoolSpan is a leading innovator of industry-standard security processors optimized for the mobile market. Its TrustChip® mobile encryption engine is a critical component to mobile security solutions and enables the protection of applications, operating systems and mass market mobile devices. Today, TrustChip Secured solutions are FIPS 140-2 Validated, deployed by government, enterprise and offered by leading wireless operators to protect sensitive communications. To learn more, visit http://www.koolspan.com or call +1.240.880.4400.