New release forges fresh sounds as it explores the past 200 years of American music. 'Pioneers For A Cure - American Songs To Fight Cancer' Now on iTunes. 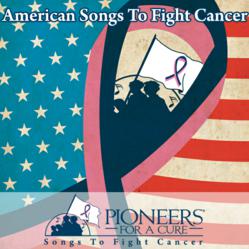 I want you to 'Stand By Me' to fight cancer. Ben E King

From guitarist GE Smith's opening chords of 'Shenandoah,' to the zeitgeist psycho-blues of Gary Lucas' 'Go Down Moses,' a wide range of American song classics - Jazz to Blues, Rock to Reggae - have been donated by 14 leading artists to fight cancer.

Charities receiving funds from downloads of 'American Songs To Fight Cancer' include St. Jude Children’s Hospital, Living Beyond Breast Cancer, American Cancer Society, Susan G Komen for the Cure, National Marrow Donor Program and Hospice of the North Shore & Greater Boston.
Pioneers For A Cure - Songs To Fight Cancer is the largest showcase of cancer charities on the web. Called '[A] stellar model of artist-driven grassroots philanthropy' by National Geographic, the non-profit project records public domain songs, reinterpreted and made available for donations of as little as $1.99. This treasure trove of over 100 songs has been recorded by dozens of artists from around the world including Suzanne Vega, Ben E. King, Tom Chapin, Tom Verlaine, Matt White and David Broza. Fine artist Mira Sasson has painted the Pioneer Portraits of the singers, which are made available as US Postage Stamps to fight cancer. Proceeds from song downloads are donated to artist-selected cancer charities such as the American Cancer Society, St. Jude Children's Hospital, the Breast Cancer Research Foundation, and Susan G. Koman for the Cure.

Mira Sasson's portraits of the artists are available as US Postage.

2012 will bring new collections, one focused on the Jazz selections from our catalogue, and another collection of our best guitar songs.

Please contact Pioneers For A Cure for more information, reviews and other press requests.