Trauma and Resiliency Resources, Inc. launches a movie! "Warrior Camp" to describe its Warrior Camp program, carefully designed to address combat-related PTSD. Horses' Hooves and Warriors' Hearts is a program for warriors, first responders and their families."Warrior Camp" can be seen on YouTube and TRR's homepage! 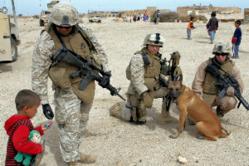 “On an average day, eighteen veterans of our nation’s armed forces take their own lives” Judge Reinhardt, Ninth Circuit Court of Appeals, May 10, 2011.

“On an average day, eighteen veterans of our nation’s armed forces take their own lives.” Judge Reinhardt, Ninth Circuit Court of Appeals, May 10, 2011. The Rand Corporation 2008 report on the Invisible Wounds of War estimated that of the 1.64 million troops deployed to OEF/OIF as of Oct. 2007, 300,000 suffer from PTSD or Major Depression; 320,000 suffer from Traumatic Brain Injury. In the past 3 years, these figures have increased.

Trauma and Resiliency Resources, Inc. (TRR) has made a movie - "Warrior Camp" and launched a new web site to assist first responders, combat veterans, and their family members by providing them with valuable resources for dealing with the effects of PTSD. TRR announces two active programs: Warrior Camp and Horses’ Hooves and Warriors’ Hearts.

Warrior Camp is a weeklong intensive treatment program that has been carefully designed to address combat-related PTSD in an Active Duty Military population. The pilot Camp scheduled for February 2012 targets those that have served in Iraq and Afghanistan. The purpose of Warrior Camp is to create a safe environment in which the trauma of going to war can be healed. Included are a combination of trauma treatments such as Eye Movement Desensitization and Processing (EMDR), EAGALA-model Equine Assisted Psychotherapy (EAP), Yoga, and Healing Story workshops. More details on the program can be found in a recently produced video, “Warrior Camp,” on TRR’s YouTube channel.

Horses’ Hooves and Warriors’ Hearts is a non-residential EAGALA-model treatment program that uses horses as part of a therapy team to help human clients work through the aftermath of PTSD and other challenges. A live Horses’ Hooves and Warriors’ Hearts demonstration and fundraiser will be held on December 4, 2011 at Gardnertown Farms in Newburgh, NY.

About Trauma and Resiliency Resources, Inc.

Founded in 2004, Trauma and Resiliency Resources, Inc. is a 501(c)(3) public charity that was created to meet the on going psychological needs of New York City’s firefighters, police officers, military service personnel, and their families.

The purpose of our organization is to assist first responders, combat veterans, including active duty soldiers, sailors, airmen, marines, reservists and guardsmen, and all their family members, in understanding that people often do not bounce back after significant traumatic experiences. Many people suffer alone for a very long time before reaching out, in part because they think (or have been told) that trauma is a permanent condition they need to learn to live with. This is not correct. Treatments are available that may alleviate or resolve trauma symptoms and enhance resilience.

Founded in 2004, TRR is dedicated to assisting traumatized individuals connect with trauma-related resources, including therapists with advanced training in this area.

TRR's Mission is to provide:
a) multi-faceted trauma intervention and on-going support services to individuals who have experienced severe stress or trauma as a result of line of duty responsibilities, including, but not limited to: uniformed and non-uniformed workers who responded to the World Trade Center attacks, military service personnel returning from duty, uniformed workers responding to emergencies in the routine execution of their job responsibilities, and the families of all of the above;
b) outreach, information and resources to impacted individuals and their families;
c) information and guidance to clinicians working with these individuals;
d) referrals to follow-up services when necessary. TRR is dedicated to assisting traumatized individuals connect with trauma-related resources, including therapists with advanced training in this area.