Bill Self (1921 – 2010) appeared in more than 30 films between 1945 and 1952, including “Red River” directed by Howard Hawks, and went on to produce many feature films including “The Shootist” starring John Wayne. His love for the American West was kindled early on with a movie about a lady sharpshooter, Annie Oakley. 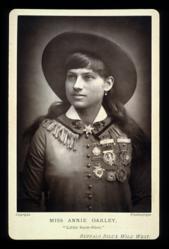 Once 15-year-old Bill Self saw Barbara Stanwyck star as Annie Oakley at the Keith Theatre in Dayton, Ohio, he was hooked.

Once 15-year-old Bill Self saw Barbara Stanwyck star as Annie Oakley at the Keith Theatre in Dayton, Ohio, he was hooked. Annie Oakley’s brother, who lived nearby, had loaned some of his Oakley memorabilia for display in the theatre lobby. The 1935 film and the memorabilia fired Self’s imagination, and his fascination with Oakley and William F. “Buffalo Bill” Cody took root.

As the story goes, Bill Self had embraced Annie Oakley’s work so much, that after that first movie, he contacted Oakley’s brother, and the two became friends. Then, at age 17, he started writing an Oakley biography and persuaded his family to travel to Cody, Wyoming, so that he could study the Oakley scrapbooks in what was then the Buffalo Bill Museum.

He even went so far as to coax the museum’s founder and curator, Mary Jester Allen (Buffalo Bill’s niece), to name him Assistant Historian—complete with letterhead stationery and business cards! The book he started was never published, but Self’s love for Annie Oakley, Buffalo Bill, and the West led to service on the Board of Trustees of the Buffalo Bill Historical Center from 1984 until his death in 2010.

On Friday, September 23, 2011, Self’s daughter, Barbara Self Malone, on behalf of herself and her brother, Edwin B. Self, presented a large collection of their father's Annie Oakley memorabilita to the Buffalo Bill Historical Center in Cody, Wyoming. Over the years, the elder Self had given much of his Annie Oakley collection to the Center, adding to its extensive Buffalo Bill and western history holdings.Included in the bequest and previous gifts were clothing, letters, gear, firearms, photographs, and other memorabilia.

“Dad always loved heroes,” Malone says. “Even as a teenager, he was fascinated by Annie Oakley. She took risks; she excelled; and she had a strong connection to the American West. With his collection, he felt connected to Annie Oakley; and with his early experiences in that Buffalo Bill Museum, he never hesitated in his desire that the collection should one day go to the Buffalo Bill Historical Center.”

Part of the bequest was a ca.1892 William Cashmore rifle produced by Charles Lancaster & Company. Malone and her husband, George, formally presented the English-made double rifle—thought to be the customized to Oakley’s measurements with a silver AO on the stock—at a luncheon of the Center's Board of Trustees in Cody.

The Historical Center has one of the most important Annie Oakley collections in existence including clothing, gear, saddle, firearms, posters, and photographs.

“We couldn’t be more pleased about this acquisition,” Executive Director and CEO Bruce Eldredge said. “With it, we add significantly to our Annie Oakley collection—much of it due to the generosity of Bill Self and his family. These latest treasures are truly extraordinary.”

Committed to connecting people with the Spirit of the American West, the Buffalo Bill Historical Center, an Affiliate of the Smithsonian Institution, weaves the varied threads of the western experience—history and myth, art and Native culture, firearms technology and the nature of Yellowstone—into the rich panorama that is the American West. For general information, visit http://www.bbhc.org, or call 307.587.4771.

Buffalo Bill Historical Center, Cody, WyomingCelebrating the Spirit of the American West since 1927.