In the month of November, the Eclipse community is celebrating 10 years since the start of the Eclipse open source project. In November 2001, the Eclipse IDE and platform were first made available under an open source software license. 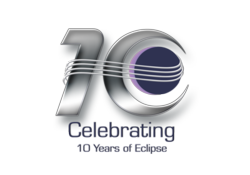 Eclipse began as a platform for building tools, and its first killer app was the Java IDE. But the Eclipse community has since expanded into many technology areas. Some of the key accomplishments of the Eclipse ecosystem are listed below.

“We are incredibly proud of what Eclipse has accomplished over the last ten years,” explained Mike Milinkovich, Executive Director of the Eclipse Foundation. “The combination of a strong technology platform, a vibrant commercial ecosystem, the right community model, and passionate individuals has made Eclipse a worldwide industry success. Moving forward, we see Eclipse as the place for continued industry innovation and collaboration. The next ten years are going to be just as exciting! Projects like Orion, Xtext, Mylyn, JGit, Virgo will keep Eclipse an exciting place.”

"IBM is proud of its 10-year affiliation with the Eclipse Foundation, from founding member to one of the most active advocates of Eclipse-based technology and product development" said Sal Valla, Vice President Architecture and Technology, IBM. "It is vitally important to encourage and enable open, transparent technology communities based on open standards and open source collaboration. The committers, Eclipse Foundation, member companies and users have brought not just technical innovation, but organizational and governance innovation as well, all of which will endure."

The Eclipse Foundation is organizing a number of activities to celebrate the 10th birthday.

More information about the 10th birthday at available at [http://www.eclipse.org/10years

About the Eclipse Foundation

Eclipse is an open source community, whose projects are focused on building an open development platform comprised of extensible frameworks, tools and runtimes for building, deploying and managing software across the lifecycle. A large, vibrant ecosystem of major technology vendors, innovative start-ups, universities and research institutions and individuals extend, complement and support the Eclipse Platform.