The founder of BRAC, the world's largest development organization, has won the WISE Prize for Education, a $500,000 award styled as a Nobel for the field of education 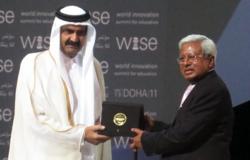 Abed discovered a successful formula, and he adapted and expanded it – first in Bangladesh and then in other countries.

In recognition of his outstanding work in the field of education, Sir Fazle Hasan Abed, founder and chairperson of BRAC, has won the $500,000 WISE Prize for Education in Doha, Qatar. The Emir of Qatar, His Highness Sheikh Hamad bin Khalifa Al-Thani, awarded the prize to Abed, who in 1972 founded what has gone on to become the world’s largest development organization, at the World Innovation Summit for Education (WISE) on Nov. 1.

His Excellency Dr. Abdulla bin Ali Al-Thani, chairman of the WISE conference, praised the humanitarian’s life and career, which he said “embody the values of WISE.” Abed, a native of Bangladesh, “recognized that education is a passport to social inclusion and opportunity. He discovered a successful formula, and he adapted and expanded it – first in Bangladesh and then in other countries.

“As a direct consequence, millions of people around the world lead healthier, happier and more productive lives,” Al-Thani added. “His vision, resourcefulness and determination are vital ingredients of the innovation process and he stands as an example to all of us who believe that education, more than anything else, determines the destiny of individuals and societies. The jury saw him as an ideal WISE Prize Laureate.”

Abed is the first recipient of the prize, conceived in 2010 as a Nobel for the field of education. The world’s largest prize of its kind, the jury for the award consisted of five eminent persons in the field of education: James Billington, the U.S. Librarian of Congress; Jeffrey Sachs, director of The Earth Institute and Quetelet Professor of Sustainable Development at Columbia University; Fatma Rafiq Zakaria, chair of India’s Maulana Azad Educational Trust; H.E. Naledi Pandor, Minister of Science and Technology for South Africa, and Abdulla bin Ali Al-Thani, the WISE chair.

In debates and panel discussions at the Doha conference, which runs from Nov. 1 to Nov. 3, BRAC officials are promoting the nonprofit’s high-tech, low-touch approach to educating the world’s poor. BRAC delivers a message of cost-efficiency and scalability to a summit of over 1,000 thought leaders running from Nov. 1 to Nov. 3 in Doha.

“In these difficult financial times, as more and more people rise up to speak for the ‘99%,’ occupying streets across various cities of the world, the issue of inequity has been thrown into the forefront of world politics,” says Abed. “How do we begin to address this? We start with education – because education is the great equalizer.”

Already educating millions, BRAC is in the midst of an international expansion effort that sees it perfecting and scaling up its innovative low-cost education approach with help from private sector partners. BRAC is scaling up massively in Uganda thanks to a $45 million commitment from The MasterCard Foundation, for instance. Numerous public sector agencies such as the UK’s Department for International Development and the Australian Government Overseas Aid Program have also partnered with BRAC on education initiatives.

Soon celebrating 40 years of operations in Bangladesh, the Dhaka-based organization emphasizes large-scale solutions. According to BRAC officials, the wisest investments are often as simple as renting a schoolhouse instead of building new ones.

After just five years in Uganda, BRAC and The MasterCard Foundation already reach over 2 million people and are on schedule to reach 4.2 million people, or over 12 percent of the population, by 2016. BRAC has exceeded commitments made in 2007 to educate youth in the poorest parts of Africa and Asia, having committed to mobilizing $271 million for education at the Clinton Global Initiative conference in 2007, with a goal of reaching 7.5 million children by 2012. BRAC has already raised more than $288 million to reach 5.6 million children.

“Innate talent is distributed equally around the world at birth, knowing no bounds of geography or class,” says Susan Davis, president and CEO of BRAC USA. “Opportunity is not. We need to redress that imbalance if this world of 7 billion is to prosper as a whole.”

In addition to traditional learning, BRAC seeks to “educate the whole child” with life skills training as part of a comprehensive antipoverty strategy designed to create ladders of opportunity for the poor. For instance, it is embedding social and emotional learning into its curriculum, teaching self-awareness, self-management, social awareness, relationship skills and responsible decision-making. This approach is especially important in conflict and post-conflict environments like Afghanistan and South Sudan.

BRAC also partners with private entities to promote connectivity among the poor when it is cost-effective to do, using mobiles phones, smart phones, desktop and laptops. The organization is currently in partnership talks with Pearson PLC, a leading global media and education company, to assist in Pakistan and elsewhere.

Sir Fazle Hasan Abed’s humanitarian work with BRAC earned him a British knighthood in 2010 and a Clinton Global Citizen Award from former U.S. President Bill Clinton in 2007. He has also received the Henry R. Kravis Prize in Leadership, the David Rockefeller Bridging Leadership Award and the Gates Award for Global Health from the Bill and Melinda Gates Foundation, and the Conrad N. Hilton Humanitarian Prize.

BRAC is a global development organization dedicated to alleviating poverty by empowering the poor to bring about change in their own lives. BRAC’s holistic approach aims to achieve large-scale, positive changes through economic and social programs that enable women and men to realize their potential. BRAC was launched in Bangladesh in 1972 and today reaches more than 138 million people in Africa, Asia and the Caribbean through programs that address poverty by providing micro-loans, self-employment opportunities, health services, education and legal and human rights services. Learn more at http://www.bracusa.org.