New Study Examines the TV Consumption Habits of Generations X, Y and i Adults 18-24 and 25-34 Most Likely to Connect Social Media to TV Viewing; Teens Most Likely to Watch with Friends and Family 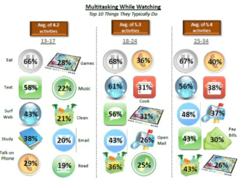 A new study released today, “Watching Gens X, Y & i,” paints a detailed portrait of 13-34 year old consumers and how they watch television: often while taking part in up to four or five activities all at the same time, from eating, cooking and cleaning to texting, surfing the web, emailing, playing games or listening to music.

“Many 13-34 year olds are multi-media multitaskers, but their social media activities vary depending on age group,” said Char Beales, president and CEO, Cable & Telecommunications Association for Marketing (CTAM), and head of the organization that commissioned the study.

Younger generations have been raised in an entertainment world where content is available anytime, anywhere and on numerous platforms. This study exposes what teens and young adults are watching, with whom they’re watching, where, how often and on what devices.

Although about half of 18-24 and 25-34 year olds follow or “like” TV networks/shows, only 38% of those 13-17 do. The leading social networking activities while watching TV are looking up info (31% of 13-34 year olds), discussing shows online (29%), posting updates/tweeting (24%) and visiting a network or show page (22%). However, these activities are almost twice as likely to be conducted among 18-24 and 25-34 year olds compared to teens.
Some additional findings include:

WHO influences their TV viewing?

WHAT genres do they watch?

WHERE do they watch?

HOW do they watch?

This research, conducted by C+R Research, was commissioned by the Cable & Telecommunications Association for Marketing (CTAM) to investigate the effect of lifestyles and life stages on media and technology usage of younger consumers. It included both qualitative and quantitative online phases in the summer of 2011, and also utilizes data from C+R’s comprehensive syndicated YouthBeat study to provide additional context. 2,124 total interviews were conducted as part of the quantitative phase.

ABOUT CTAM
CTAM, the Cable & Telecommunications Association for Marketing, is a non-profit professional association, dedicated to helping the cable business grow. To that end, CTAM provides consumer research, an interactive executive innovation series, conferences, awards and the “CTAM SmartBrief” to its individual members. On behalf of 90 corporate members, the organization leads the Advanced Cable Solutions Consortium and Business Services Council, and facilitates national cooperative marketing efforts, including the Cable Mover Hotline® and Movies On Demand® initiatives. The corporate website is http://www.ctam.com and CTAM can be found on Facebook, LinkedIn and Twitter.