A recent study shows that mega churches are growing at five percent annually. The Christian church, on the other hand, is declining by 13% annually. So where is all the mega church growth coming from? Smaller, less resource-rich congregations. Then what is the answer to the Great Commission? Is it in bigger churches and better programs? Well, the answer might surprise you, according to the Casual Christian. 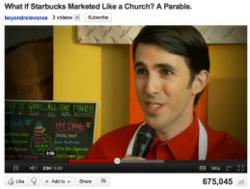 Some of the stuff that we ...thought would really help our people grow and develop spiritually… wasn't helping people that much.

For years, the leaders of America's largest churches have labored under the assumption that their methods of doing ministry were sound because they produced such dramatic growth. But was their success a work of God or the result of modern marketing methods?

Bill Hybels, pastor of one of the largest mega-churches in America, recently commissioned a survey of his congregation to ascertain the effectiveness of their programs in promoting spiritual growth. His conclusion was, “Some of the stuff that we have put millions of dollars into thinking would really help our people grow and develop spiritually… wasn't helping people that much. Other things that we didn't put that much money into and didn't put much staff against is stuff our people are crying out for.”

How to Promote Spiritual Growth

The Casual Christian, a new website, provides some helpful suggestions on how to promote spiritual growth based on the ministry methods of Jesus Christ, the Apostles, and some of the great saints of the church. It shows how modern technologies can be used to leverage the effectiveness of these tried and true methods. The result is a modern ministry manual that has the potential to transform church from a one hour worship service to a community of believers actively engaged on a daily basis in mutual ministry and outreach for Christ.

The Casual Christian examines the history of the Christian Church from the days of the Apostles through the great revivals of the 18th and 19th centuries. It compares the moribund corporate style religion of today with the dynamic religious life of the early church that propelled church membership from 25,000 to 20 million by the end of the fourth century and extended its reach from Palestine east to India and north to Great Britain. It examines the reasons for the decline of the modern church and prescribes solutions for renewal.

Preview the first three chapters of the book before you buy at :

“Regardless of its true character and intent, the Christian community is not known for love, nor for a life transforming faith,” says Christian pollster George Barna. In case you hadn't noticed, the church is in serious trouble. Consider the following facts:

Church attendance is declining at the rate of 13% per year.

In 2005 the number of Americans who identified themselves as Protestant dropped below 50% for the first time.

At the current rate, a majority of Americans will identify themselves as non-Christian by 2035.

By 2050 Islam will overtake Christianity as the world's largest religion.

The fastest growing church in America is Wicca. Although small, their numbers are doubling every 30 months.

Nearly four out of ten non-churchgoing Americans avoid church because of negative experiences with church people.

Average church giving is only four percent of income.

Ninety-five percent of Christians have never led anyone to the Lord.

Sixty-three percent of pastors have not led anyone to the Lord in the past two years.

Forty-nine percent of pastors spend no time ministering outside the church during the week.

Christians have the same divorce rate, the same obsession with pornography, and many of the same values as the rest of society - so much so that they cannot easily be distinguished from non-Christians.

I wrote The Casual Christian to expose readers to the richness of the fellowship and depth of devotion of the early believers in hopes of awakening a desire for a deeper. more meaningful relationship with their Savior and one another. The book shows how shallow and superficial the Christian experience has become in the modern church and what it will take to turn things around. You can read the first three chapters and place your order at bookstore.crossbooks.com