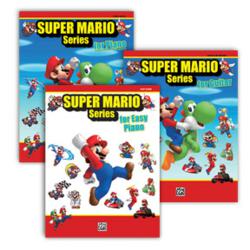 Super MarioTM Series feature 34 arrangements of the most instantly recognizable melodies beloved by generations of gamers around the globe. From Koji Kondo's iconic "Super Mario Bros.™ Ground Background Music" to the New Super Mario Bros.™ Wii™ themes, the iconic pieces in the book series represent two and a half decades of Nintendo® video game favorites.

The Easy Piano arrangements are simplified to make them enjoyable for novice piano players, whereas the Intermediate-Advanced Piano Solos book features note-for-note transcriptions for solo piano performance. The Solo Guitar performance book is arranged in easy guitar keys at the easy-intermediate level, with full notation and TAB. All pieces in the series are suitable for recitals, concerts, and solo performances.

Adding to the fun, graphics from the corresponding games grace each page of the sheet music. Whether to impress friends or performing for audiences of all ages, Super MarioTM Series sheet music folios provide authentic transcriptions to the legendary video game for the first time ever—a perfect gift for fans of video game series and musicians.

Nintendo’s Super Mario Bros.™ is one of the best-selling video games of all time, with more than 40 million copies sold worldwide, and ported to almost every one of game publisher’s major gaming consoles. The game’s theme, by world renowned video game composer Koji Kondo, is arguably the most identifiable tune in the world and considered a representation for video game music in general.