ISOH/IMPACT must collect $50,000 to send 1.5 million servings to the Horn of Africa 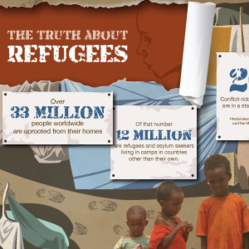 Our sources in Kenya have indicated that the need far exceeds what we initially expected ... We don’t have enough money for shipping and we hope somebody cares enough to help.

As famine grips the Horn of Africa, an Ohio aid group is determined to deliver 1.5 million meals to a sweltering refugee camp near Somalia with hopes of preventing at least one person there from starving to death. Before they can ship the food, however, ISOH/IMPACT President Linda A. Greene said her relief organization must raise nearly $50,000.

They need your help.

“I’m really concerned about what’s going on in Africa,” Greene said. “We all tend to become a little callous to the suffering of others, but they are our fellow human beings facing certain death unless we reach out and help.”

With Somalia experiencing its worst drought in 60 years, in its hardest hit areas, 10 percent of children younger than 5 years old die every three months, according to UNICEF. As families flee violence in their war-torn homeland, famine is spilling over into neighboring Kenya and Ethiopia with refugees crossing the border in search of food.

Greene explained that the situation is one of the worst humanitarian crises on the planet. More than 3 million people need food immediately while another 10 million Somalis risk starvation later.

ISOH/IMPACT needs about $16,000 to ship the first container of food to the Horn of Africa. Each container carries more than 500,000 servings. Five-gallon buckets filled with corn, wheat, pasta pilaf and vegetable barley soup are being kept in storage until enough money is raised to deliver the food to the difficult environment.

“But they have to see that we’re not just throwing food at the problem,” Greene said.

When they empty the buckets, the refugees will have something to gather water, irrigate seeds and sit on as a stool.

“You can keep whatever you have in the buckets,” Greene said.

A $35 donation will help ship and distribute about 465 food servings to the Dabaab refugee camp in Kenya. Visit the famine relief page to make a contribution.

“Our sources in Kenya have indicated that the need far exceeds what we initially expected,” Greene said. “We don’t have enough money for shipping and we hope somebody cares enough to help.”

Sending 1.5 million servings of food to Africa will cost about five cents per serving, a small price for potentially improving the lives of thousands of people, she added.

The skyrocketing costs of sugar, salt, maize and wheat contribute to malnutrition causing about a third of all childhood deaths in Somalia, said Lori Kazmierczak, ISOH/IMPACT’s executive director of operations.

“We’ve got to make a change,” Kazmierczak said. “Somebody has to start somewhere.”

In 2010, ISOH/IMPACT delivered more than 10 million servings of food to hungry children and families around the world.

“There have been lives changed. They write us and tell us that they’ve changed,” Kazmierczak said. “Africa needs our help now. It’s only by the grace of God that we are not in the same position.”

ISOH/IMPACT is a community-based, non-profit organization dedicated to ensuring a brighter future for children and their families. The mission of ISOH/IMPACT is to reach out and serve others by mending broken bodies, feeding hungry families, responding to disasters and investing in communities.