Recent data from the price comparison site Idealo.co.uk indicates that the recent devastating floods in Thailand have already begun to have a tremendous impact on the prices of hard disk drives throughout Europe by more than doubling in six weeks. 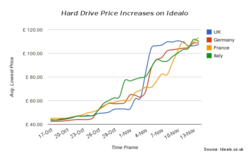 Dating back to May 2011, prices for the most popular hard drives (1) remained extremely consistent, with the average lowest price (2) hovering around £44.

However, beginning in late October and peaking in early November, there has been a dramatic increase in the prices offered by online stores on Idealo's British, French, German and Italian comparison portals.

Taking Idealo.co.uk's ten best-selling hard drives as the benchmark, the lowest available price offered by ecommerce sites on these products was tracked daily and an average aggregated.

Consequently over the past month, Idealo has seen an average 151% increase in the lowest average price offered across fours of its price comparison websites.

The average price on 1st October lay at a slightly below average £43,29. By November 14th, however, the average lowest price had increased to £109,78. The greatest price velocity occured between October 18th and November 14th, when prices increased at an average rate of 5.4% per day. The most drastic price increases have appeared on Idealo's German website.

The International Data Corporation (IDC) recently reported that as of early November, half of Thailand's production capacity was directly impacted by the flooding. Thailand accounted for 40-45% of worldwide HDD production in the first half of 2011.