Dallas Has The Most Drunk-Driving Deaths In The United States, New Study Shows 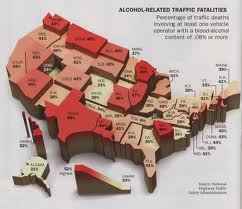 The author cites a CBS publication which lists the 10 U.S. cities with the highest number of insurance applicants with alcohol-related offenses on their driving records. These statistics came from Insurance.com, which claims to have examined insurance companies in the country's 20 biggest cities. Boston, however, was not included. The following cities were determined to have the highest rate of DUIs per capita:

Amazingly, according to a Louisiana State University research paper, The Population Consumption Model, Alcohol Control Practices and Alcohol-Related Traffic Fatalities, 90 percent of these cities are not among the top ten U.S. cities with the most alcohol-related traffic deaths. In fact, the results were much different. The authors, Deborah A Cohen, Karen Mason and Richard Scribner, determined the following cities to have the highest rates of DUI-related deaths in the country; the figures represent DUI deaths for every 100,000 people:

These results, which paint a different picture than CBS's publication, are shocking, but Cohen, Mason and Scribner insist that the numbers make sense. According to Drunk Driving vs. Alcohol-Related Traffic Deaths in U.S. Cities, mortality rates for alcohol-related traffic accidents are heavily influenced by state and local laws and regulations.

Drunk Driving vs. Alcohol-Related Traffic Deaths in U.S. Cities also discusses two viewpoints, also called models, for looking at alcohol-related deaths: the "medical disease" model and the "population consumption" model. The medical disease model is based on the assumption that drinking problems are enhanced but not caused by environmental and psychological factors, but the population consumption model assumes that environmental factors, such as regulations and punishment, play the biggest role in alcohol-related traffic fatalities.

The authors of the Louisiana State University study came to the conclusion that the primary causes of higher mortality rates are alcohol access, enforcement, deterrence measures and the severity of punitive action in any given city or state. For example, Salt Lake City Utah, which boasts the lowest DUI rate in the country, might have limited access to alcohol, stiffer punishments and more thorough alcohol enforcement than Dallas, Texas.

Depending on the city, state or county, punishments for driving under the influence vary greatly, and communities often reserve the right to make them more stringent. Cities, counties and states with more lenient laws, less enforcement and easy access to alcohol are the ones with the highest death tolls. To rectify the problem, the article suggests stiffer punishments for offenders, more stringent licensing requirements and limited access to alcohol.