Shuttle to Move to Intrepid Museum in 2012 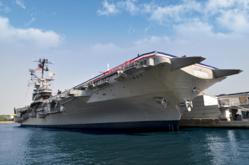 Intrepid Sea, Air & Space Museum will be the new home of Shuttle Enterprise

“The U.S.S. Intrepid had a rich history with NASA's mission, and Enterprise belongs in this historic setting."
- NASA Administrator Charles F. Bolden

It is expected that the space shuttle orbiter will be flown from Washington D.C. to JFK International Airport by ferry-flight aboard a 747 NASA Shuttle Carrier Aircraft in the spring of 2012. It will then be transported during the summer of 2012 by barge to the Intrepid Sea, Air & Space Museum Complex located at Pier 86 of the Hudson River Park, and placed on its flight deck under a protective covering. The public will have the ability to see the shuttle while visiting the Intrepid.

“NASA is proud to transfer the title of space shuttle Enterprise to the Intrepid Sea, Air & Space Museum in New York City,” said NASA Administrator Charles F. Bolden. “The U.S.S. Intrepid had a rich history with NASA's mission, and Enterprise – the pathfinder for the Space Shuttle Program – belongs in this historic setting. Enterprise, along with the rest of our shuttle fleet, is a national treasure and it will help inspire the next generation of explorers as we begin our next chapter of space exploration.”

“We thank all of those who have supported and continue to support the mission of having Enterprise in NYC and at the Museum. This historic addition to the Intrepid Museum Complex will be a great contributor to the region and the city and be a catalyst for further redevelopment in the neighborhood,” said Charles de Gunzburg, Co-Chairman of the Intrepid Museum.

“Enterprise’s new home will create a significant amount of new temporary and permanent jobs, and generate millions in economic impact annually for the local economy,” said Richard Santulli, Co-Chairman of the Intrepid Museum. “Enterprise brings a magnificent and historical artifact to NYC for millions to enjoy.”

Marenoff-Zausner said that “Enterprise is one of the country’s most significant national treasures and we are excited that its new home will be here at the Intrepid in New York City -- it will be a destination for the millions of tourists who visit our great city and region. The Enterprise not only supports our mission to honor our heroes, educate the public and inspire our youth, but will offer a thrilling platform for STEM (science, technology, engineering and math) education, innovation and forward thinking.”

On April 12, 2011, NASA Administrator Bolden announced that the Intrepid Museum was one of four institutions in the nation to receive a Space Shuttle. The Enterprise is currently located at James S. McDonnell Space Hangar at the National Air and Space Museum's Steven F. Udvar-Hazy Center in Chantilly, Virginia near Washington Dulles International Airport.

About the Museum
The Intrepid Sea, Air & Space Museum complex includes the 900-foot-long aircraft carrier ‘Intrepid’ with seven full decks and four theme halls; the guided missile submarine Growler; and an extensive collection of over 30 aircraft including the A-12 Blackbird, the fastest plane in the world, and the British Airways Concorde, the fastest commercial aircraft in the world. Guests can experience areas of the ship including the Flight Deck, Hangar Deck, fo’c’sle (commonly known as the anchor chain room), new multimedia presentations and exhibit collections, interactive educational stations and a state-of-the-art public pier.

Guests to the Intrepid Sea, Air & Space Museum also can experience the 12,240 square-foot interactive Exploreum – which contains a variety of hands-on exhibits – that teaches guests about the different properties of the sea, air, space and living at sea as each relates to the ship Intrepid. In the Exploreum, guests can experience a flight simulator, transmit messages using Morse code, sit on the bunk of a crewmember, learn how the Intrepid turned salt water into fresh water and perform various tasks while wearing space gloves.

The Intrepid Sea, Air & Space Museum is proudly supported by Bank of America.