FreeGovernmentCellPhones.net reports that hundreds of thousands of people have been caught defrauding the government’s free cell phone program. 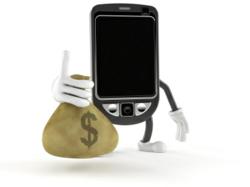 You cannot obtain more than one free cell phone from the government without committing perjury on your application.

For example, the audit of just one company in Florida and Tennessee rooted out so many cases of fraud that it was determined that the company had been overpaid by $1,100,000 in just a two-month period.

According to industry insider FreeGovernmentCellPhones.net, Big Brother is looking for the people guilty of defrauding the government’s free cell phone program.

The program, Lifeline Assistance, has grown rapidly in recent years. In fact, it has grown so rapidly that some experts say it has outgrown the safeguards intended to protect against fraud.

“The ... program itself, which provides subsidized cell phones, has been subjected to a lot of waste, fraud and abuse,” said Tom Schatz, president of Citizens Against Government Waste.

The Federal Communications Commission seems to agree. In a national survey, it recently pegged 269,000 people in 12 states for receiving multiple subsidized phones.

“People were getting multiple cell phones, they were selling them on Craigslist,” Schatz continued, “so clearly people know how to take advantage of a program like this.”

The Lifeline free cell phones for the poor program (often wrongly called the Obama phone) only allows one Lifeline phone per head of household, and that includes any landline phones receiving a Lifeline discount. When applying for a phone, the applicant must confirm under penalty of perjury that they do not already have a Lifeline phone. Accordingly, anyone having two Lifeline phones has committed a crime.

In most states, the companies that offer the phones are also responsible for overseeing the program, leading to charges that the government is letting the foxes guard the henhouse. Considering that these companies are paid as much as $10 per month for each person in the program, some critics say it’s actually to their benefit if customers sign up more than once.

The results of a Government Accountability Office fraud investigation reinforce that point of view. Only 5% of Lifeline providers have been audited so far, but 76% of those audits have already discovered fraud.

For example, the audit of just one company in Florida and Tennessee rooted out so many cases of fraud that it was determined that the company had been overpaid by $1,100,000 in just a two-month period. More than 200,000 duplicate phones have already been cleared from the books in the first seven states where anti-fraud efforts have been implemented. And although those numbers seem awful, they become truly horrifying when extrapolated across the entire nation and the entire Lifeline program.

That’s why the FCC is now thinking of ways to limit the rampant fraud. Some of its very sensible solutions -- solutions that shouldn’t impact honest recipients -- include requiring a minimal charge from all participants in the program, cutting off service if a telephone goes unused for 60 days, banning consumers guilty of fraud from future participation in the program, and creating a national database of users to make it easier for companies to verify eligibility.

These efforts are to be applauded. The Lifeline program does so much good for so many people that it would be a travesty if a few (or more than just a few) greedy individuals ruined it for those honest people who truly depend on the program.

LIFELINE is a government-supported program that provides free cell phones and minutes to millions of needy Americans.

FREEGOVERNMENTCELLPHONES.NET is the leading authority on the Lifeline program. It is a one-stop source for information on the program nationwide.