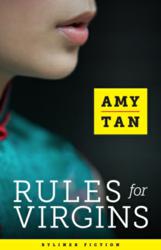 Rules for Virgins is Amy Tan's first piece of fiction she has published in six years.

In her new story Rules for Virgins—the first fiction she has published in six years—Amy Tan, beloved bestselling author of The Joy Luck Club and The Bonesetter’s Daughter, tells the startlingly sensual tale of an aging master courtesan instructing her beautiful young protégé in the ways of love and business in 1912 Shanghai.

Tan’s story, to be released December 5, 2011, marks the debut of Byliner Fiction, the digital publisher that, since its launch last spring, has published a series of bestselling nonfiction Byliner Originals from Jon Krakauer, Ann Patchett, Taylor Branch, William Vollmann, Mark Bittman, and other distinguished and breakthrough authors.

Tan takes us deep into a world where skillful courtesans mercilessly compete for the patronage of wealthy gentlemen. For the women, the contest is deadly serious, a perilous game of economic survival that, if played well, can set them up for life as mistresses of the rich and prominent. There is no room for error, however: Erotic power is hard to achieve and harder to maintain, especially in the loftiest social circles. Enter veteran seducer, Magic Gourd, once one of Shanghai’s “Top Ten Beauties” and now the advisor and attendant of Violet, an aspiring but inexperienced courtesan. Violet may have the youth and the allure, but Magic Gourd has the cunning and the knowledge without which the younger woman is sure to fail.

Her story is both humorous and heartbreaking, and the world of sexual intrigue that Tan reveals in Rules for Virgins is extraordinary. But this story is much more than seductive (and sometimes shocking) historical literary fiction: The intimate confessions of Magic Gourd add up to a kind of military manual for the War of the Sexes’ female combatants. The wisdom conveyed is ancient, specific, and timeless, exposing the workings of vanity and folly, calculation and desire that define the mysterious human heart.

Amy Tan is the author of the bestselling novels The Joy Luck Club, The Kitchen God’s Wife, The Hundred Secret Senses, The Bonesetter’s Daughter, and Saving Fish from Drowning as well as The Opposite of Fate, a memoir. She has also written two children’s books, The Moon Lady and Sagwa, The Chinese Siamese Cat. Her work has been adapted for film, television, theater, and opera, and she serves as lead rhythm dominatrix, backup singer, and second tambourine with the literary garage band, the Rock Bottom Remainders, whose members include Stephen King, Dave Barry, and Scott Turow. The band’s performances have raised over a million dollars for literacy programs. She is working on a new novel, The Valley of Amazement, to be published by Ecco.

Rules for Virgins is available for $2.99 in the Amazon Kindle Singles store, at BarnesAndNoble.com, as a Quick Read in Apple’s iBook store and in the Google eBookstore.

Since its launch in Spring 2011 with Jon Krakauer’s celebrated Three Cups of Deceit, Byliner has been a platform for great writers to tell and sell their nonfiction stories. These stories, called Byliner Originals, are written to be read in a single sitting. Our companion website, Byliner.com, features curated archives of the best nonfiction writing, and enables readers to easily find, share, and buy new and classic work by their favorite authors.

Now Byliner is expanding into fiction that ranges from short stories to novellas. “Many authors who have either written Byliner Originals or had their nonfiction showcased in our archives happen to be very gifted fiction writers as well,” says Byliner editorial director and co-founder Mark Bryant, “and they’ve been asking us when we would begin publishing original fiction. So have a great many readers. We’re happy to tell them that the day has arrived, and we couldn’t be more pleased than to be able to christen the good ship Byliner Fiction with the incomparable Amy Tan.”

To complement Byliner Fiction, we are beginning to build a structured archive on Byliner.com of great short fiction from writers such as Annie Proulx, Jonathan Franzen, Lorrie Moore, Paul Theroux, and Stewart O’Nan. There are currently 60,000 nonfiction stories in the Byliner database from more than 4,000 accomplished writers, and the company expects that the fiction archive will soon be just as big. The discovery of fiction on Byliner.com will work exactly as it does for nonfiction: Readers will have quick and easy access to a writer’s body of work, will be alerted to new work, and will be able to discover and learn more about other, similar authors whose writing we think they’ll want to read.

For an Advanced Reader Copy of Rules for Virgins or to schedule an interview with Amy Tan or Byliner’s editors, please contact Clare Hertel at clare(at)byliner.com; 505-474-6783.