The test, which is a refined version of a previous blood test, has recently been validated in an international journal. 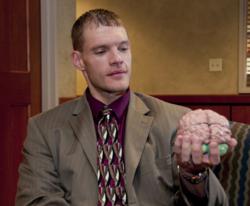 These studies suggest a blood-based screening tool for Alzheimer's disease is on the horizon.

Texas researchers have created a new blood test that could detect Alzheimer’s disease, facilitating earlier detection and treatment of this disease affecting millions of people worldwide. A report cross-validating the test has been published in the December issue of the international scientific journal PLoS ONE, which also was presented at the Alzheimer’s Association International Conference on Alzheimer’s Disease in Paris.

A team of researchers from the Texas Alzheimer’s Research and Care Consortium (TARCC) has found that biomarkers in blood serum could be combined with clinical information to accurately classify patients with Alzheimer’s disease. Sid E. O’Bryant, Ph.D., of the Texas Tech University Health Sciences Center (TTUHSC), led the TARCC team that developed the test.

O’Bryant said the test refines a previous blood test and has shown to be effective when cross-validated against another sample group.

“Basically we created a simpler version of a recent blood test,” O’Bryant said. “We created a briefer screen test in the TARCC cohort and then applied it to the Alzheimer’s Disease Neuroimaging Initiative (ADNI) national cohort and found we still accurately identify 88 percent of those with and without the disease.”

ADNI is a research project to study the rate of change of cognition, function, brain structure and biomarkers. The project was funded with $40 million from the National Institutes of Health, and $20 million from pharmaceutical companies.

The TARCC screen test represents many firsts for the potential diagnosis of Alzheimer’s. First, no other such test has ever been cross-validated in an independent cohort, all the more impressive in light of a recent article in The Wall Street Journal detailing the difficulties of reproducing study results. Second, this version of the screen test works with different sorts of blood draws making it easier for clinics to implement. Third, to date, no prior work has explicitly sought to find blood-biomarkers of Alzheimer’s across both serum and plasma and no previous attempts at identifying blood-based screening tools have utilized markers across blood fractions.

“There is clearly a need for reliable and valid diagnostic and prognostic biomarkers of Alzheimer’s disease,” O’Bryant said. “Identifying biomarkers in the blood has several advantages over other methods of classifying patients with Alzheimer’s disease, including detecting biomarkers in the cerebrospinal fluid and neuroimaging. Blood can be collected at any clinic or in-home visit, whereas not all facilities can conduct lumbar punctures to obtain cerebrospinal fluid. Older patients may not consent to lumbar puncture and may not be able to undergo neuroimaging because of pacemakers or other health issues.”

A recent article in The Boston Globe highlighted the need to test potential Alzheimer’s medicines on patients who have beta amyloid, an abnormal protein associated with the disease, but who have not yet manifested Alzheimer’s. Much as patients with high cholesterol are given medication to ward off a heart attack or stroke, preventatively administering new medicines to patients with this protein may delay onset and slow progression of Alzheimer’s disease. The TARCC test is a potentially critical tool in effectively identifying such individuals.

While a Food and Drug Administration working group recently gave preliminary approval for a neuroimaging technique to detect beta amyloid as a biological marker, no blood-based biomarker screening tool has received approval to date.

The purpose of the TARCC study was to generate a blood-based screen for Alzheimer’s disease that can be incorporated into existing medical practice, with more detailed assessment then provided to confirm the disease in those who screen positive in the blood test.

The full study can be found here.

TARCC is a statewide consortium of five medical research institutions, including TTUHSC, across the state that was funded by the Texas Legislature beginning in 2005. Through 2013, TARCC will have received more than $17.5 million in state funding.

TARCC is funded by the state with a mission to coordinate and catalyze cutting-edge Alzheimer’s research in Texas. An estimated 340,000 Texans suffer from Alzheimer’s and the condition kills about 4,800 Texas residents each year. More than 850,000 Texans currently function as unpaid caregivers for Alzheimer’s patients. Unpaid care for Texans with Alzheimer’s adds up to 971 million hours annually, the equivalent of $11.2 billion in unpaid care.