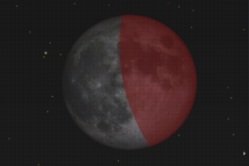 A total lunar eclipse is a spectacular celestial event that everyone can see. It's the perfect occasion for us to launch our Android app, help millions of viewers follow the eclipse, and give them a high-quality introduction to amateur astronomy.

During the early hours of Saturday, December 10th, 2011, the last total lunar eclipse until more than two years from now will take place. To celebrate this rare celestial event, Southern Stars, a developer of award-winning astronomy apps and accessories for Apple mobile devices, is launching a free public beta of its SkySafari app for Android mobile devices.

The iOS versions of SkySafari have been downloaded more than 900,000 times from the iTunes Store. SkySafari has won multiple awards, including a MacWorld 2010 Best-of-Show, Sky & Telescope Magazine's Hot Product award for 2012, and an endorsement by Astronomers Without Borders. SkySafari is the only mobile astronomy app which can correctly reproduce this December's total lunar eclipse, or any other. SkySafari's Plus and Pro versions have the largest database of any mobile astronomy app, and are the only ones which can control backyard telescopes.

And now, SkySafari is coming to Android. Southern Stars founder Tim DeBenedictis writes, "A total lunar eclipse is a spectacular celestial event that everyone can see and understand. It's the perfect occasion for us to launch our Android app, help millions of viewers follow the eclipse, and give them a high-quality introduction to the hobby of amateur astronomy on the mobile devices they use every day."

Although not yet for sale on the Android Market, Southern Stars is making a free public beta of SkySafari for Android available from its web site. To download the beta, view this page from the web browser built into your Android device:

The beta requires Android OS version 2.2 ("Froyo") or later. It will run on Android tablets as well as phones. The beta will expire on December 31st, 2011. The final version of SkySafari will be available for sale on the Android Market by that date.

To download SkySafari 3 for iOS, go to the iTunes store by clicking this link:
http://itunes.apple.com/us/app/skysafari-3/id437108143?mt=8

To download SkySafari for Mac OS X, go to the Mac App Store by clicking this link:
http://itunes.apple.com/us/app/skysafari/id451895081?mt=12

More information about Saturday's total lunar eclipse, including video and instructions for how to track it, can be found here:
http://www.southernstars.com/eclipse/details.html