Feature documentary on milk 'Got the Facts on Milk?' promotes increased interest in a non-diary diet among Buddhists and yoga practitioners. 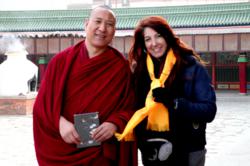 Milk does a body bad

Shira Lane, director of the new documentary film 'Got the Facts on Milk? - The Milk Documentary' was in the rural town of Xi’ah’e meeting with Monks of the Labrang Monastery. The documentary film provides a candid look at the high-stakes political, economic, ethical and environmental issues involved with milk consumption.

The Labrang Monastery is home to 6 monastic colleges covering esoteric Buddhism, theology, medicine, astrology and law. Many Buddhist monks in the Himalayan region depend on a diet of yak milk, butter, and cheese due to the harsh winters and nomadic nature of Tibetan society. Lane presented the Monks with a copy of the film and discussed the potential hazards of milk consumption. The timing of Lane’s visit was particularly poignant given China’s rapidly increasing consumption of dairy products, which may have profound effects on the health of China’s population and the environment worldwide.

Although it is unclear whether Himalayan monks will universally remove diary from their diet, there is increased interest in a non-diary diet among Buddhists and yoga practitioners. In late November of this year the Berkeley Buddhist Monastery hosted a free public screening, of the film. After the screening, Monk and teacher Ven. Ajahn Guna, led the audience in chanting, including, “Milk Does a Body Bad”. This was followed by a Q&A with Director Shira Lane. Guna stressed the importance of awareness in connection to the food we consume and its wide-ranging spiritual and physical effects.

‘Got the Facts on Milk?’ is a feature documentary that has attracted considerable underground attention, as it goes behind the scenes of the ‘Got Milk’ campaigns and highlights shocking facts about milk that the dairy industry seems to sweep under the rug.

Currently the film can only be found on the film’s website milkdocumentary.com. Ven. Ajahn Guna, refers to the film as ‘an outstanding contribution to humanity’.